Jamshedpur FC go down 0-3 to Bengaluru FC at the Furnace!

Press Release 2023-01-19 Indian Super League Comments Off on Jamshedpur FC go down 0-3 to Bengaluru FC at the Furnace! 890 Views 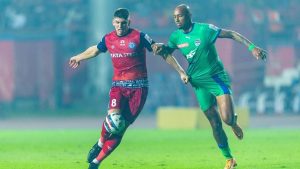 Jamshedpur FC’s hopes for a playoff place were dealt a major blow as they were beaten 0-3 by Bengaluru FC at the Furnace.

Harry Sawyer earned his place in the starting eleven for this game, and Germanpreet Singh returned to the starting lineup as well, but Jamshedpur FC plans to control the game were dealt a major blow early.

A quality cross from the right in the seventh minute was turned home by the in-form Rohit Kumar, much to the chagrin of the home crowd.

Ritwik Das had a great chance to equalise moments later, but his strike went over the bar.

Despite some continued home pressure, Bengaluru FC doubled their lead with a fierce strike from outside the box by Roy Krishna in the 34th minute.

The visitors held on with a two-goal lead till the half-time break but the Men of Steel had a golden opportunity to half the deficit just moments after the restart.

Harry Sawyer misread the flight of the cross and with the goal gaping, was unable to head the ball into the net.

Bengaluru FC had been clinical up till now and added yet another goal in the 62nd minute as Sivasakthi Narayanan cut inside and fired home with his left boot.

Sawyer had multiple opportunities to pull a goal back for Jamshedpur FC but was unable to do so.

The game ended 3-0 to the visitors and leaves Jamshedpur FC with an enormous mountain to climb in the race for the playoff places.

Previous One Month On: 5 billion engaged with the 2022 FIFA World Cup in Qatar!
Next I-League VIDEO: Goal of The Week – Seilenthang Lotjem (Sudeva Delhi FC)!