One Month On: 5 billion engaged with the 2022 FIFA World Cup in Qatar! 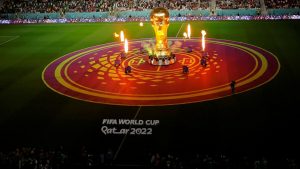 On December 18, 2022, 88,966 spectators packed into Lusail Stadium and close to 1.5 billion around the world watched a pulsating Final between Argentina and France. One month to the day since Lionel Messi, Lionel Scaloni and La Albiceleste lifted the trophy, we review some facts and figures from on and off the pitch, that reflect the sheer scale of the biggest single sporting event on the planet.

Early figures suggest that around 5 billion people have engaged with the 2022 FIFA World Cup – Qatar, following tournament content across an array of platforms and devices across the media universe. On social media, according to Nielsen, there have been 93.6 million posts across all platforms, with a 262 billion cumulative reach and 5.95 billion engagements.

The 2022 FIFA World Cup – Qatar was enjoyed inside the stadiums by 3.4 million spectators – up from 3 million in 2018 – who were treated to a historic tournament. 172 goals ensured that Qatar 2022 became the highest scoring FIFA World Cup in history, eclipsing the previous highest total of 171, in both 1998 and 2014.

Three matches at Lusail Stadium, including the Final, saw the highest attendance for a match registered at a FIFA World Cup since USA 1994 when Brazil played Italy in front of 94,194 at the Rose Bowl in Pasadena.