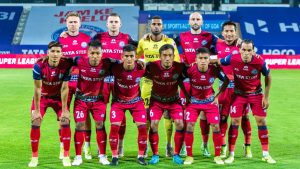 After a draw in their last game against Kerala Blasters in the last game of 2021, the Men of Steel entered the pitch tonight to face Chennaiyin FC with the aim of beginning 2022 on a positive note with a win to grab the required three points.

The game started with the Men of Steel attacking right from the kick-off whistle with a close chance from Greg Stewart’s lobbed ball into the box, filled with Chennai defenders but the ball was unattended and it went past the face of the goal. A few minutes later, the Men in Red came back with another threatening attack from the left flank to which Len controlled the ball on his right in the middle of the box, but the ball was too high for him to connect it perfectly and it flew over the crossbar. After some close chances on both ends of the pitch, Chennaiyin FC took the lead right before the water break from a free-kick set piece. The ball was lobbed in by Vladimir Koman on the far post where Lukasz Gikiewicz was positioned; he connected a perfect header into the net to the cross to give Chennai the lead that they worked hard for.

The Men of Steel pushed hard after conceding the goal to make a comeback and end the first half with an equalised score; they came with a quick counter-attack, moments before the half-time whistle, with Greg in the midfield who passed it to Jordan Murray in the edge of the box. He lobbed the ball back towards the Scotsman who stepped up for a volley with his left foot, but did not get the perfect connection to the ball; the ball deflected off the defender and went for a corner kick. Despite leading the stats with more attempts, Jamshedpur FC were unsuccessful to convert their play as they trailed by one goal at half time.

The second half began with a series of attacks at the Chennaiyin FC box from the Jamshedpur attacking squad right away but the Marina Machans made sure the ball stayed out of the goal to keep them in the lead. Chennaiyin FC pushed harder with their quick attacks from all sides with Anirudh Thapa being a dominant element in the attacking third and being a constant threat for Jamshedpur FC defenders. The local lad, Mobashir Rahman who came in substitution, made his 50th appearance for the club in all competitions and took a shot from the right flank, but the Chennaiyin goalkeeper was calm and collected and made a comfortable save to keep the team in an advantage of a goal.

Later another chance came up for the Men of Steel as Greg dribbled past the defenders to invade the box and pulled the trigger on target but was denied by the man between the sticks after which another shot followed by Jordan Murray which was blocked away by the Marina Machans defensive line-up. The second half was filled with chances for Jamshedpur but their attackers were unable to put any of the chances in the back of the net to come back in the game. One of the chances looked like it could have turned into the goal that the Men of Steel needed with a lobbed ball into the box from the half-line towards Jordan; he collected the ball on his thigh and the ball bounced towards Ritwik who took his attempt on goal, but the 2 defenders in the white kit did a good job to block the shot away to safety.

Despite multiple attempts on target, bunch of goal-scoring opportunities and a strong approach against the ball on both ends, the Men of Steel walked out with a slim defeat at the Athletic stadium, and closed their first fixture of 2022 with an unfortunate loss.