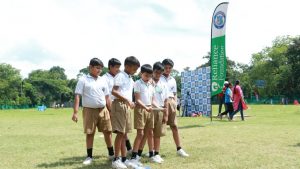 Jamshedpur FC, in collaboration with Loyola School, Jamshedpur hosted its first Grassroots Football Festival after the pandemic. The event brings football back to the city after a two-year-long hiatus. This festival marks the commencement of several other Grassroots schools, which will resume in Jamshedpur.

More than 1,000 children participated, 70 volunteers from Masti Ki Pathshala and 40 coaches helped today to organize various games and activities to sow the seed of football among young minds. The training center will cater to kids of Under-5, U-8 and U-11.

Jamshedpur FC recently organized a refresher course for grassroots and youth coaches, keeping in line with its vision of a grassroots program to start in all the football schools very soon. As Jamshedpur sets the stage to host the Indian Super League, these grassroots festivals will involve the locals and get excited for the “Champions of India.”

Speaking on this, Jamshedpur FC’s Head of Grassroots and Youth Development, Kundan Chandra, opined, “These festivals are the best way to introduce football to young kids. It will help them learn and bring out their talents early. The Grassroots helps children develop their physical skills, which will keep them physically and mentally healthy.”

Seeing the excitement of kids playing on the pitch, Loyola Vice Principals Father Vinod and Ms Vineeta said, “Activities outside the classroom add additional value to a child’s learning, especially sports. The Grassroots program by Jamshedpur FC is essential for children at Loyola to learn values such as discipline, teamwork, and sportsmanship, which will help them in the future. We observed how much the kids enjoyed and learned today. Congratulations to team Jamshedpur FC for bringing children back to the field after the long halt due to the pandemic.”

Jamshedpur FC’s CEO Mukul Choudhari added, “We had been getting lots of calls and texts from parents and students to start the football school again, and this was the best time to make it happen. I am happy to see such a huge response, and more schools will be kicking off in no time.”

Nikita Mehta, one of the parents at the opening event at Loyola School, said, “My child missed the football fields for a long, and we are happy that Jamshedpur FC has resumed the sessions.”