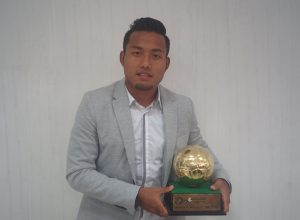 Chennaiyin FC and Mohun Bagan AC forward Jeje Lalpekhlua has won the 2016 FPAI (Football Players Association of India) Indian Player of the Year Award. Jeje received the award at the 2016 FPAI Awards held at the Cooperage Stadium in Mumbai on Monday night.

Jeje is currently enjoying the best spell of his career having won the Indian Super League with Chennaiyin FC, the I-League crown with Mohun Bagan and SAFF Championship with the Indian national team in the last 12 months.

Since June 2015, Jeje has scored 20 goals in 43 appearances at club and international level including six for Chennaiyin FC in ISL 2015 which saw him win the best Indian player accolade in that competition. Five of those six goals were scored in a run of four straight games.

Jeje bagged a brace in India’s semifinal victory over the Maldives in the 2015/16 SAFF Championship and also scored one and created the winner in the final against Afghanistan.

Currently on loan from Chennaiyin FC at Mohun Bagan, Jeje created a new record of most goals by an Indian in a single edition of the AFC Cup. He is currently on five goals in the 2016 AFC Cup and could still add to his tally.

The 25-year-old also became the first player from Mizoram to captain India as he led out the national team in the 2018 FIFA World Cup qualifying fixtures against Iran and Turkmenistan in March 2016.

This is Jeje’s second success at the annual FPAI awards, as in 2011 he won the Young Player of the Year accolade.