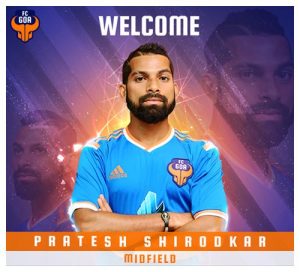 “We are pleased to have added Pratesh to our ranks. Being a Goan, he understands FC Goa and brings that local flavour to his game. With his experience and knowledge of the game, he will most certainly prove a valuable asset to us,” FC Goa CEO Sukhvinder Singh said in a statement.

27 year old Pratesh Shirodkar born in Calangute, learned his football with the renowned Sesa Football Academy and made his first steps in professional Indian football with I-League side Sporting Clube de Goa in the 2012/13 season.

Last year he was part of Mumbai City FC in the ISL – Season 2.