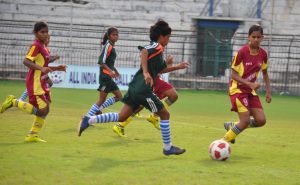 Day eight of the 2016 edition of the Junior Girls National Football Championship is being played in Cuttack, Odisha with two games to be played in total across the day at the Barabati Stadium.

Match No-27: Tamil Nadu 1-2 Haryana – Barabati Stadium
Haryana scored a 2-1 comeback win over Tamil Nadu. The goalscorers for Haryana were Renu (43rd) and Nisha (57th), while the goalscorer for Tamil Nadu was Sureka (24th).