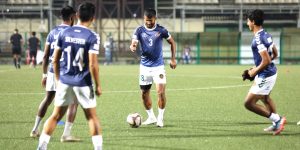 Having faced a start to their new year, Mumbai Kenkre FC will host Mohammedan Sporting in their I-League 2022-23 fixture at the Cooperage stadium in Mumbai on Thursday, November 19 at 4:30pm.

Mumbai Kenkre FC entered the winter break on a high note with an upset win over Real Kashmir, but since the restart have suffered back-to-back defeats away from home against first and second-placed Sreenidi Deccan and RoundGlass Punjab respectively. The Mumbai outfit will return to Cooperage, where they have lost just once in four games, hoping for a change in fortune. At Cooperage the have also managed to get points against Churchill Brothers and defending champions Gokulam Kerala, no mean feat for a young team.

“We had a strong start to the season and the win against Real Kashmir was a huge morale boost,” Mumbai Kenkre FC assistant coach Mangesh Desai said while addressing the media at the pre-match press conference. “We lost a couple of games away from home, but now we are back at Cooperage. and the home support will definitely help us in our coming home matches”

Back in December, these two sides played out an entertaining 2-2 draw in Kolkata. It was a game where Kenkre FC forced their way back from a goal down twice over, to earn a valuable point away from home. Desai expects a similar display from his boys in the hunt for three points tomorrow.“Mohammedan is a good side but they have struggled recently. We have prepared well in the last few days, we got a good result against them in Kolkata and we will hope to replicate a similar performance tomorrow. Hopefully, we will get the three points.”

Kenkre FC have a chance to do what others already have. The Kolkata club have struggled on the road, having failed to win a single away game in six attempts. The Black and White Brigade, finished second in the league last season and were considered among title contenders when the season began. Unfortunately, they have fallen behind quickly, in ninth place now, and fighting to stay away from the other end of the table.

Kibu Vicuna, who took over after the winter break, is still searching for his first win in the league. “The target is to get the three points,” Vicuna said. “We know it is going to be difficult. We haven’t won a game, and have got two draws. It will be a big challenge.

“Kenkre FC are a tough team, and have only lost here once. We respect them but I have confidence in our players and our team.”

The match between Mumbai Kenkre FC and Mohammedan Sporting will be broadcast live on Eurosport and Doordarshan Sports and streamed live on the Discovery Plus OTT platform.