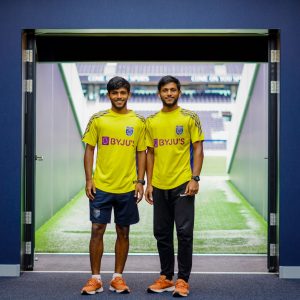 Kerala Blasters FC have confirmed that academy graduates Mohammed Aimen and Mohammed Azhar are all set to join the leading Polish club Rakow Czestochowa for a three week training stint. These academy graduates will train with the Polish side where they will be able to gain important footballing experience and participate in an excellent & immersive training environment.

The twin brothers’ footballing journey started with the Under-15s team of Kerala Blasters. Their steady progress through the academy teams resulted in a first senior team call up during the 2022 preseason, prior to the start of the current ISL 2022/23 season. Till date, the two have represented Kerala Blasters in the Kerala Premier League, Durand Cup and NextGen Cup.

“I’m extremely happy for our young academy players to test themselves in Europe. Aimen and Azhar are great examples of hard work and professionalism and they definitely deserve this great opportunity to learn in a different environment. The club is ready to do everything possible to help every young player to develop and explore new opportunities. Also, we promise our supporters that we will keep producing young talents from the academies, which is one of the key strategic objectives of the club. Trials/training abroad is only a small part of the overall development plan being implemented,” said Karolis Skinkys, Sporting Director of Kerala Blasters, on what is surely a landmark move.

Polish club Rakow Czestochowa is currently at the top of the Polish Football League, in line for a UEFA Champions League qualification next year. Aimen and Azhar, who are currently participating in the ongoing Kerala Premier League, will be travelling until the middle of December.

The club can confirm that this is the first of many more player exchanges to come as part of its commitment to youth development and academy enhancement. Everyone at Kerala Blasters Football Club wishes both Aimen and Azhar all the very best.

Previous India all set to be a part of the FIFAe Nations Series 2023 for the third time in a row!
Next XtraTime VIDEO: ATK Mohun Bagan after Hyderabad FC win!