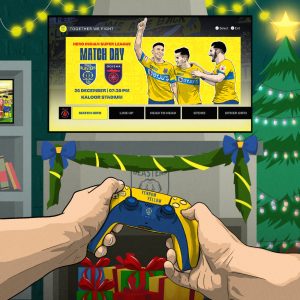 Kerala Blasters will take on Odisha FC in the Boxing Day fixture of ISL – Season 9 at the Jawaharlal Nehru Stadium in Kochi. This game will mark the start of the second phase of the season for both teams as they have finished the first 10 matches beforehand.

When the last time these two sides met, at Odisha FC’s home, it turned out to be a tough night for men in yellow. They went down to the Kalinga Warriors for two goals to one, even though it was Kerala Blasters who took the lead in the first half, Pedro Martin’s late goal offered them the victory at Bhubaneswar. Harmanjot Khabra was on the score sheet that day.

Kerala Blasters have a slight edge over Odisha FC as they have won seven out of 19 matches and Odisha FC have won five, including the latest meeting which happened earlier in this season. Points were shared on seven occasions.

Sahal Abdul Samad who scored a brace earlier this season against NorthEast United FC made it into the scoresheet as he scored a delicate goal against Chennaiyin FC last week. He now has 10 ISL goals to his name. Ivan Kaliuzhnyi was pivotal in the middle of the park. He also provided the assist to Sahal’s goal, which showed his quality on the ball and his vision of the game. Marko Leskovic had a good outing against Chennaiyin FC last Monday. He was strong and steady in the defense and denied Marina Machans many times.

The live streaming will be available on Disney+ Hotstar, Jio TV, Star Sports network and Asianet Plus.