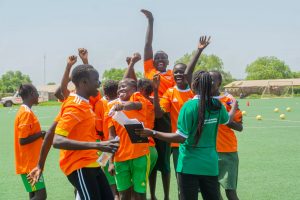 The development of women’s football was also a priority throughout the year, in conjunction with the Vision 2020 – 2023 of the FIFA President.

Various personalities from women’s football spoke to us about FIFA’s development programme, as well as special events and unique experiences from the year.

Here is a brief selection of what they had to say. And if 2022 taught us anything, it is that women’s football will again be front and centre on FIFA.com in 2023 – and not merely due to the upcoming FIFA Women’s World Cup™ in Australia and New Zealand!

“Of course there are still people who doubt that we can play football. But when a woman or a girl has an objective in life, they can achieve it and just forget about the people who don’t support others,” said Dona Rajab (Assistant Coach, Saudi Arabia).

“When it comes to leadership personalities, people often think of extroverted, loud leaders, but we know that’s not true. One of the things that definitely came across to me over and over again during the programme (Women in Football Leadership) was authenticity. You need to be true to who you are and make sure you’re doing everything in an authentic way, because people notice if you’re not! You can lead in all sorts of ways as long as you’re being true to yourself,” said Diana Matheson, former Canadian national player.

“The menstrual hygiene project is a pilot project that FIFA was kind enough to bring to South Sudan. I believe it is the first of its kind. And yes, it is hugely important for us because if you look at the poverty line in a country like South Sudan, 80-82 per cent of the people in that country are below that line and live on two dollars a day. This project is really eye-opening and gives us a platform to create more ambassadors for the programme, but also to raise awareness of the problem that female athletes and women in general face in this country,” said Shilene Booysen, coach of the country’s women’s national team.

“Football is for everyone and gives everyone a chance to showcase their talent. It doesn’t matter where you come from, whether it’s a small country or a big one – everyone should have an equal chance to succeed. I think it’s an ideal situation in that respect,” said Angelina Chua, Seychelles National Coach.

“It’s a historic journey for our country. We’ve never played two matches in two different countries in a FIFA window before. It enabled us to learn so much about the weather, the pitches, our game plan and everything we need to know for Australia & New Zealand. We’re so grateful to the Netherlands and Portugal for the opportunity,” said Amelia Valverde Villalobos, National Coach Costa Rica (Participant FIFA Coach Mentorship Programme).

“FIFA’s support is more than significant. The question is whether it would be possible to realise any of these projects without the help of football’s biggest institution. If FIFA continues to promote women’s football, then I’m sure the future will be bright. Girls in Serbia have already experienced this because they can now play football in smaller cities and villages, too. This is also impacting the senior game, because we now have a much larger base of players. And we’re just getting started…” said Bojana Veselinović, women’s national team manager and head of women’s football development in Serbia.