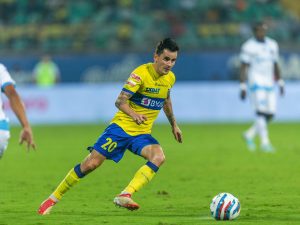 Kerala Blasters scored an impressive 3-1 win against struggling Jamshedpur FC at the Jawaharlal Nehru Stadium in Kochi on Tuesday night.

Jamshedpur FC head coach Aidy Boothroyd kept his starting eleven unchanged from the last match against FC Goa. The Gaffer started with a 3-5-2 formation with Ishan Pandita and Daniel Chima as the strikers upfront.

The game initiated well with end-to-end play from both sides. The hosts took the early lead within the 9th minute of the game. Dimitrios Diamantakos played a perfect low cross between the defenders and the goalkeeper which Apostolos Giannou sent at the back of the net with a backheel.

In spite of the quick setback, the men of steel maintained their counter-attacking display. As result within the 17th minute, Daniel Chima Chukwu equalized the score line. The striker gets on the deflection and chips the ball perfectly to the top corner with the opponent custodian nowhere near the post.

Jamshedpur FC kept good momentum in the game as they continued to rely on quick counterattacks. But an unfortunate handball at the half-hour mark from Boris Singh inside the box led to a second chance for the hosts. Dimitrios Diamantakos comfortably slotted it home from the spot to regain the lead for Kerala Blasters.

Going into the lemon break the score line remained 2-1 with Kerala Blasters having the lead.

Coming back in the second half Ishan Pandita got an early chance to equalize from a one-on situation. Ricky kept a lovely long ball into Pandita’s feet, but the shot trickled past the post.

Based on a quick one-touch play Adrian Luna made it 3-1 for Kerala Blasters in the 65th minute scoring the winner for the night.

After this loss, Jamshedpur FC stands 10th in the league table with just five points from 11 matches.

Jamshedpur FC next plays Chennaiyin FC at the home on January 7.