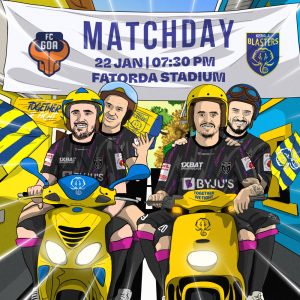 Kerala Blasters lost their last game against Mumbai City FC 0-4 which ended the eight-match unbeaten streak of the Kerala Blasters, but Ivan’s boys will be eyeing to bounce back against the Gaurs.

When these two sides met earlier in this season, it was Kerala Blasters who emerged as the best out of two. Kerala Blasters won the game 3-1 at Kochi. Adrian Luna, Diamantakos and Kaliuzhnyi found the nets for the home side and Noah Sadaoui nodded one back for the visitors.

Adrian Luna was a workaholic in the field for Blasters against Mumbai City. He was orchestrating almost every attack of Kerala Blasters but failed to find the nets against the Islanders. He covered a distance of about 12 kilometers and proved to be a vital member of the team.

Hormipam Ruivah was another standout player against Mumbai City FC. Even though the team conceded few goals, the young defender tried his best to coordinate the back line under unfamiliar conditions.

Both teams have faced each other 17 times and the Gaurs holds an upper hand above the Kerala Blasters with nine wins and 41 goals scored. The Kerala Blasters have won four, including the reverse fixture and have scored 26 goals. Four matches ended in stalemate.

The game between FC Goa and Kerala Blasters will be available on Disney+ Hotstar, Jio TV, Star Sports network and Asianet Plus.