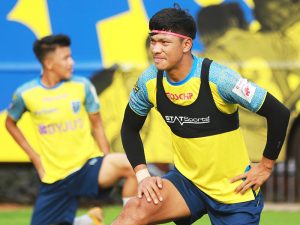 Kerala Blasters head coach Kibu Vicuña and striker Jordan Murray addressed the press ahead of their eighth league match of this season against Mumbai City FC. During a half-hour session, Murray and Kibu spoke about the upcoming game, the mood of the camp after winning the last game and gave some insights!

Mumbai City FC has cemented their position in the top spot with 16 points and have only lost against North East United.

Talking about today’s opponents, Kibu said, “They are a very good team with very good players and they are one of the best teams in the competition. But we are improving, the last games we played better. We are also improving in the training sessions, I’m happy with the way we are training and I hope that we are going to play a good game tomorrow.”

After missing some of the initial matches, local lad Sahal has come back to the line-up. Kibu shared his thoughts of the midfielder,

“Sahal has the quality to play outside and inside. He is a player who is good at possessing attack and also, he is good in transitions. He is improving every day. The best version of Sahal is going to come. He is working hard and he knows that he is an important player for us. The good thing for us is that he can play in different positions and he plays well.”

The Kerala Blasters signed Subho Ghosh from ATK Mohun Bagan on a three – year deal. Speaking about signing his former player, Kibu said, “We wanted an Indian striker and after Shaibor left to Sudeva, we had Jordan and Garry. Now we have Subho as a striker. Of course, we have other possibilities, Rahul can be played as a striker, Puitea, even Sahal as well. Subho is a player who is young, hungry to play and is a goalscorer. He doesn’t need too much time to have the chance. I know him and I know that he can be a good striker in Indian football.”

Note: Only after the press conference, the info came out that the deal might be off.

In the last match, Kerala Blasters had a lot of changes, with a complete revamp in the central defence, with the Bakary-Costa duo replaced by Hakku and Sandeep Singh. Speaking on the changes, Kibu said, “We will play with the team that we think is going to be the best. I’m very happy that both Sandeep and Hakku played well. Hakku even scored a goal, they are training well and have gained more confidence after last game. The good news for us is that they are ready to play when it’s necessary.”

“For us, here, everyone wants to play. Everyday we think of the best team to play. For me it’s not important whether you are a foreigner, or if you are an Indian player, we are going to the players which can be the best team to face the game. Yes, we made five changes and the team performed well and we won the match,” Kibu added.

Jordan Murray shared his thoughts on Indian football and the differences by saying, “It’s obviously a different challenge, actually the football is very different, I think it’s very attacking over here. So far, I’m really enjoying it and I’m learning a lot. I just want to improve and do well not only for myself but for the club as well.”

Kerala Blasters claimed its first ever victory under Kibu Vicuña when Hakku and Murray scored against Hyderabad FC. The Sniper expressed the mood inside the camp and the morale of our players

“Definitely you know, it’s gonna improve when we get our first win. It’s been a long time coming, we played some good football, we’ve been unlucky in some matches but now, the morale is definitely boosted and everyone is hungry for more. I probably could have had more than one on the weekend. I’m looking to improve my finishing and everyone else is improving in the training. There is a positive energy at training. We are looking to get nothing but the three points against Mumbai with confidence, going to that match.”

Jordan Murray will be facing Adam Le Fondre, who he had met before in the A-League. Murray played for Perth Glory and Le Fondre represented Sydney FC. Murray said, “Adam has played at the highest level in world football, in the English Premier League, the Championship as well. He is a class player, I played against him last year. He is a good striker but we’re going to try to stop him. As a team, we can nullify that and I guess we can get the three points this weekend.”

Kerala Blasters captain Sergio Cidoncha has been replaced by Spanish defensive midfielder Juan de Dios Prados López. Speaking about the forced change, Kibu said, “Cido can play at number 6,8,10 in fact in the first three matches he played in different roles. First at number 8, second more defensive and against Chennaiyin FC then he played as number 6. Juan de is an experienced player. Indeed, he played more as number 6 last time at Perth Glory but he can play in the role of a central defender and in different positions. He is a player with good position of attack and tactically complete. We are happy that he is here to help us.”

With the addition of Juan de to the squad, Kibu addressed the question about the midfield, “We are talking about concrete names. For example, Jeakson, who had fantastic games and he showed that he can be a very good number six. He is playing really well. So it’s not only the question of Juande, Vicente or Facundo in the midfield. We have Jeakson, Rohit, Givson, Ayush who are capable to play. Sahal playing inside, that is his best position.”

Murray shared his thoughts on his healthy competition with Hooper, “It’s definitely a healthy relationship, we all get along, Gary and I played against Bengaluru FC and for me it was a great time to play with him. He is someone basically I looked up to before I even met him.” He added that both of them are learning from each other, it’s really nice to meet a player like Garry Hooper who has played at the highest level.”

Kibu shared some insights on his philosophy against the Islanders, “Our philosophy is the same. In every game, you are preparing for different teams. Mumbai City has their own style of playing and they are a very competing team, both defensively and offensively. We are preparing for the game according to the players they have and the style of the team. They have Bartholomew Ogbeche, he was a very important player for our team last season and other players in the midfield. We have good players and we are going to face the match with the objective to get the 3 points.”

Kibu highlighted the teams objective, he quoted, “Our objective is the next game, only next game. Because thinking about what is going to happen in later games won’t allow us to focus. We have to focus on the next game and win points, we know that is going to be a tough challenge. I think we are a better team than two weeks ago and I’m sure that we are going to be better in two weeks. We are trying to improve every day. The objective for us is to give the best version of Kerala Blasters tomorrow.”

Murray shared his thoughts about Gary Hooper, “I won’t say Garry struggled. Every player goes through a patch, even I’ve gone through it in plenty of those matches where you’re not scoring or it’s just not coming off and that’s part of the game. For myself, I want to improve and do well not only for myself, but for the club, the fans and the team. Playing in Australia, a different league and this is my first time overseas so I want to try and have a good impression. India is a beautiful place and I could definitely see myself playing here. For me, it’s a battle against myself trying to get the best out of myself, so that I can improve, score goals and be confident. It’s about learning and helping other players. I know that if I help to improve Sahal or Rahul, they give the same back to me.”