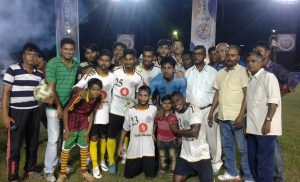 The tournament wasn’t the best for the big Kolkata clubs as Mohun Bagan had opted against participating in it before it started, while East Bengal Club and Mohammedan Sporting Club exiting in round one itself.

But Aryan Club was the best side in the competition with a 5-2 quarterfinal win over East Bengal, a 4-1 semifinal win over George Telegraph and now in the final a 6-2 over Southern Samity.

Though the organisers termed the tournament as the Kolkata Futsal League, it was rather an outdoor 5-a-side tournament, then in reality futsal is normally played indoors with rules which are different than in football!

@Arunfoot
Previous The Yellow Fluo 2016/17 away jersey has been presented by macron & Bologna FC!
Next Premier Futsal: Bengaluru and Kolkata play out 1-1 draw!