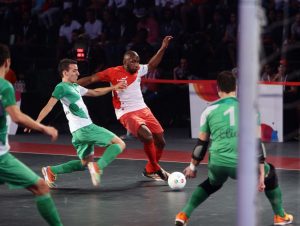 Kolkata 5s and Bengaluru 5s played out the first ever draw in Premier Futsal with the match ending 1-1 at the Jawaharlal Nehru indoor stadium in Chennai on Saturday night.

Bengaluru’s Paul Scholes deployed himself at the centre of the action, as he did at Manchester United, and he was finding his players with ease. His composure on the ball and keen eye to spot free players saw Neto almost open the scoring with his shot going wide. But Scholes got his assist as he found Jonathan and his shot elicited a poor save as Cidao bundled the ball into the net to give Bengaluru the lead in the first quarter.

It seems almost incredulous to suggest that goalkeepers can create chances but it was Kolkata 5s goalkeeper Cidao who advanced into Bengaluru’s half to set up a move that almost saw Crespo score before a deflection saw it go wide.

The second quarter saw Bengaluru patiently circulating the ball looking for openings with Kolkata initially struggling to win the ball back. Bengaluru’s Nabil was a busy man moving around the pitch to make himself available for passes and finding teammates until Scholes was reintroduced following a substitution. However, Kolkata eventually found their rhythm and found the equaliser with three minutes to go.

Akshay Nair dispossessed Bengaluru and tried to advance before he was brought down. But Pula, stationed on the right flank, pounced on the loose ball and took his shot to give Kolkata the equaliser before half-time.

The third quarter saw Cidao try his luck again by advancing into Bengaluru’s half. With the ball at his feet near the half-line, he saw vacant space in midfield and was invited to take a shot that was blocked by Elias. He had a chance on the rebound as well which went just wide. He wasn’t done yet as he had to run back to get into position to head away a shot from deep in Bengaluru’s half to round off an eventful 10 seconds.

Not to be outdone by Cidao, even Bengaluru goalkeeper Elias tried his luck with a piledriver of a shot. Cidao was beaten but the ball whistled past the post. Paul Scholes also got into the act late in the game and faked a shot that saw Gabriel slide right past him before the United legend’s shot was blocked.

Kolkata soon got into foul trouble and then Mohammed Islam got an orange card for a foul as Bengaluru countered. Bengaluru opted to take a free-kick without a wall instead of a penalty (which is allowed in Futsal) but Cidao was up to the task and palmed the shot away to end the game at 1-1.