Kolkata’s United SC kicks-off their pre-season training for the 2016/17 season! 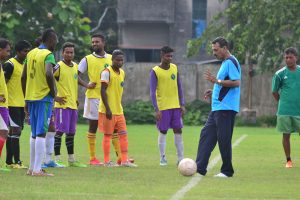 Former I-League outfit United Sports Club kicks off their pre-season training for the 2016/17 season from Wednesday at Kalyani A Block Ground outside of Kolkata.

United SC have appointed former India international defender Subrata Bhattacharya as their new chief coach and he has agreed to share his professional experiences and give his services to the Purpel Brigade. Partha Sen and Nirmalya Halder will be Subrata Bhattacharya’s assistant coaches.

“We have a young side but I have full faith in them. I am hopeful that this team will give a tough competition their opponents,” Bhattacharya said.

The new season began with an introduction amongst the players, coaching staff and club officials, followed by some physical drills under the watchful eyes of head coach Subrata Bhattacharya to evaluate the players fitness levels, before starting full fledged training and playing practice matches.