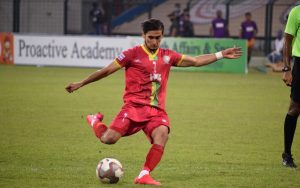 Tajik forward Komron Tursunov has returned to TRAU FC ahead of the 2022/23 season from I-League rivals Churchill Brothers.

Komron is a 26 year old forward who started his career at Regar-TadAZ Tursunzoda club in Tajikistan. He joined Istiklol FC in 2018 after scoring 23 goals in 57 matches.

In the 2020/21 season, Komron played for TRAU FC scoring six goals in 13 matches, but missing out on the I-League title. Thereafter he played for FC Khujand in Tajikistan before signing for promoted Rajasthan United, but he leftthem without having played any I-League game for them to join Churchill Brothers, where he played 16 matches, scoring six goals.

Now Komron Tursunov returns for a second stint with the Manipuri side.

Tursunov made his Tajikistan senior national team debut on October 2, 2018 against Nepal. Tursunov is a regular for the Tajikistan national team. He played and scored against the Indian National Team in the 2019 Intercontinental Cup.