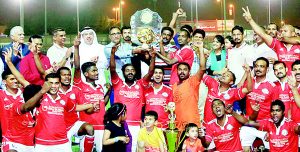 In one of the best League finals conducted in the history of Kuwait Indian Football, Soccer Kerala, sponsored by Shifa Al Jazeera, became the first team from Kerala to win the prestigious J. P. D’Mello Memorial K.I.F.F. League Trophy.

Numerous spectators and football fans turned up to watch the finals. Though the match was played under floodlights, it was tough on the players with summer ‘shamal’ winds blowing and temperatures near to the 40°mark.
Soccer Kerala were crowned new Champions of Kuwait after beating FC Sparx 1-0 at Kuwait’s Mishref Grounds on May 20, 2016.

Soccer Kerala’s star striker and top scorer of the league Jineesh (Kuttapu) scored the winning goal midway into the second half placing a shot past FC Sparx goalkeeper Mubashir, who, earlier had denied the champions at least on three occasions with excellent saves off Shefeek, Jinto and Ramsheed.

Sparx, coached by former India international Jaykumar, played a calculated game all throughout with captain Hussain Ali, Ahmed, Hisham, and wing-back Savio Rodrigues running untiringly. However, hot, windy conditions and perfectly timed tackles by Kerala’s most feared defender Domnic made it difficult for FC Sparx to make a comeback.

Soccer Kerala played to great tactics unleashed by coach Biju Johny. They stood strong till the end encouraged by frenzied supporters who raced on to the field to hug players upon the final whistle, and the euphoria created by the jubilant supporters during prize distribution was nothing short of a ‘Champions League’ final.

Soccer Kerala’s young striker Jineesh (Kuttappu) who was outstanding throughout the season, dazzled once again in the final with exceptional display – amazing touch, ball control and footballing technique. He was rightly adjudged man of the match.

Jineesh also won the Top Scorer of the Season with 17 goals. He was presented with a trophy, and a gold memento at the hands of KIFF Ex-President V.K. Vohra.

KIFF President Derrick Gomindes was the chief guest on the occasion while Nasser Al Konan of Gulf Cable & Electrical Company was the guest of honour. Asif Juzer of ProSports was a special invitee along with KIFF Ex-Presidents and presidents of all participating clubs. A number of other dignitaries were also present on the occasion.
In the Presidential address, Derrick Gomendis thanked the sponsors, KIFF Managing Committee members, affiliates and everyone associated with KIFF for the support rendered towards Indian football in Kuwait.

While showing concern towards the future of KIFF due to increasing costs incurred in running the federation, Derrick highly commended the services of KIFF referees who came forward to officiate matches.

“We look to move ahead despite all hurdles and take Indian football to a higher pedestal,” stated the President. The dynamic personality is a former footballer, and current Head Coach of Goa Maroons. He has been involved with football activities in Kuwait since 1992 and has been in KIFF Managing Committee 6 times.

Vice-President Xavier Furtado later proposed a vote of thanks.

Fr. Franco Pereira Sdb., President of Don Bosco Oratary, had a special prayer to conclude. He had a word of praise towards KIFF for the encouragement and opportunities given to youth through Indian football.