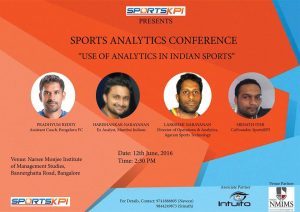 The first SportsKPI Analytics Conference will be held in Bangalore on Sunday, June 12; where SportsKPI enables sports teams and athletes the chance to get to know end to end performance solutions.

The speakers of the first SportsKPI Analytics Conference are

– Pradhyum Reddy, Assistant Coach of Bengaluru FC, will be speaking on the role of analytics in scouting in Indian football

– Harishankar Narayanan (Ex-Analyst with Mumbai Indians), will speak on the role of an analyst in an IPL franchise

– Laskshmi Narayan (Director of Operations & Analytics), will also speak on the role of an analyst in an IPL franchise

– Srinath Iyer will be speaking on evaluating a raider in Kabaddi