Macron & the Albanian Football Federation extend their partnership until 2027! 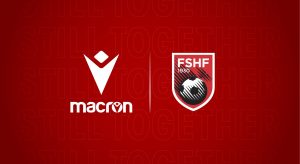 The Albanian Football Federation and Macron are extending the partnership that began in 2016, the year in which the Eagles qualified for the final round of the UEFA European Championship. The Italian sportswear brand and the Albanian Federation have announced the renewal of their technical sponsorship agreement until 2027.

The Albanian national team, which is currently managed by the Italian Edy Reja, was the first national football squad to wear Macron sportswear and the company’s ties with the FSHF (Federata Shqiptare e Futbollit) are based on personal friendships and a shared vision that have grown stronger with every passing year. In addition to supplying the kit for the men’s and women’s national teams, the new contract also includes an option to supply technical sportswear to the youth teams of all the football academies associated with the Federation.

“The Renewal of our partnership means that we share a common vision and long-term project for Albania’s national teams,” Gianluca Pavanello, CEO of Macron, told us. “Our relationship with the FSHF is based on friendship and mutual respect as well as the fundamental sporting values we share. We are delighted to continue supporting the Albanian national squads on a technical level in all the competitions they enter. Our commitment is to supply products that excel from a technical and design point of view. Players and fans will have access to kits that express the true spirit and identity of this great national team.”

“I would like to thank Gianluca Pavanello, who personally came to Tirana to consolidate the relationship with Albanian football – these are the words of Armand Duka, President of the Albanian Football Federation. – The story of our relationship with this company started in 2015, and it has been a success story ever since, as we made real history with Macron. We participated in the ‘Euro 2016’ and had positive results. It is one of our most important partners. For the first time with Macron, we also made customised uniforms, as you have already seen, and we will continue to make them. Now with the new contract, we will also begin the ‘My Uniform’ project, which entails providing free uniforms for every athlete who plays football in Albania. Macron is a worldwide br