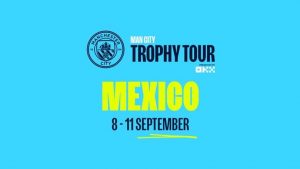 On the Trophy Tour’s first visit to South Africa, the trophy will be accompanied by City legend Joleon Lescott for a football festival and screening of our fixture against Liverpool on Sunday 16 October.

The event will be held at Central Park, Century City, where fans will have the opportunity to:

From 10am until 3.30pm, the festival will be open to all fans on a first come first served basis.

The event will include the chance for 5-12 year olds to take part in coaching clinics with Manchester City coaches (participation via sign up at the event on the day).

Fans signed up for the match screening are still welcome to join the festival earlier in the day and will be given a wristband on entry.

The trophy and Joleon Lescott will also be visiting Totalsports, Canal Walk Mall, between 4pm and 6pm on Saturday, October 15 for photos and signing.