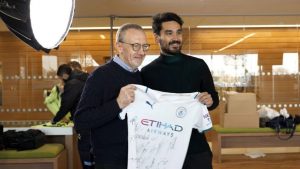 Manchester City captain Ilkay Gündogan paid a special visit to the team at Feed Manchester to surprise a much valued and respected volunteer.

Feed Manchester Team Leader Mark was nominated by his fellow Team Leader Wayne, in recognition of his hard work for the charity.

From 2015, Feed Manchester have prepared and delivered food and drink to the less fortunate.

And Mark is a star for the charity, helping it do its wonderful work in the community and is described by one of his colleagues as “the backbone of Feed Manchester”.

Gündogan, skipper of City, was a surprise guest on the day as Mark was recognised for his efforts.

It’s fair to say that Mark was in total shock as one of his heroes, Ilkay, walked through the doors.

On the moment he was revealed as the recipient of the award, Mark said: “When he turned around and said it was me, I was taken aback to say the least.

“I didn’t know a City player was coming to be honest. And one of my heroes, too! And scorer of the winning goal against Villa last season.

“So yeah it was a dream come true, really.”

The event formed part of the Club’s ‘A Time for Giving’ Christmas campaign.