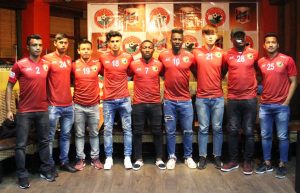 Shillong Lajong FC today announced the extension of their partnership with McDowell’s No. 1 Soda, a Diageo Group India, ahead of the I-League 2017-18 Season.

The association between Shillong Lajong FC and McDowell’s No.1 Soda has lasted for more than five years now and everyone at Lajong FC is thrilled to have them on board once again for another season.

McDowell’s No. 1 Soda and Lajong FC will be working together on various fan engagement activities like road shows and contests among many others throughout the season with the sole aim to promote football in the region.

McDowell’s Soda is one of the biggest brands in the country and has been very successful in the Northeast. They have been prominently been supporting football in Shillong and this collaboration and friendship is all about taking football to the next level.

This partnership will certainly help the Club’s ambition in the league which is set to kick off next week. Shillong Lajong FC will face I-League debutants Gokulam Kerala FC on November 27 at the Jawaharlal Nehru Stadium in Shillong at 8pm.

Earlier today, Lajong FC and McDowell’s No.1 Soda in association with Red FM Shillong conducted a bike and car rally across many places in Shillong with Lajong FC players, coaches, management and fans actively taking part in it to announce the association between the two as well as promote the I-League matches which will take place in Shillong from November 27 onwards.