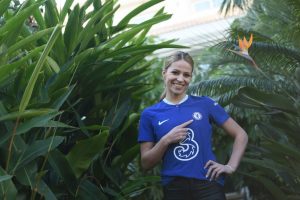 Melanie Leupolz has signed a new contract with Chelsea FC keeping the midfielder at the club until the summer of 2026.

The 28-year-old German international has been on maternity leave after giving birth to her first child in October 2022, and begins her re-integration into the first team environment by putting pen to paper on a new deal.

Speaking after signing the extension, Leupolz said, “When I was leaving Bayern, Chelsea was my favourite club and I wanted to join. I was really lucky that it worked out and my time here has been so special.”

“I played the first one-and-a-half years and it feels like I’m not done here, which is why I wanted to extend. I want more games with the team, more chances to win titles and one big ambition is to win the UEFA Women’s Champions League.”

General manager Paul Green commented, “We are delighted that Melanie has extended her contract after returning from her maternity leave. Melly played a key part in the success in her first 18 months at the club and will almost be like a new signing coming back into the squad this month. We are looking forward to seeing her back in a blue shirt and building on that success over the upcoming years.”

Leupolz joined the Blues ahead of the 2020/21 campaign, signing from Bayern Munich where she spent six years in the Women’s Bundesliga and won two league titles. She arrived with a wealth of experience and proven pedigree at the highest level.

It was a hugely successful introduction to English football for Leupolz, who played an important role in midfield as we secured the Women’s Super League and the Continental League Cup, while also reaching the maiden Champions League final in her debut season. It was the German’s strike which gave us a vital away goal against her former club Bayern Munich in the semi-finals.

She managed 34 appearances and scored nine goals during her first season at the club – including one on her home debut against Bristol – a campaign where she proved herself to be adept from the penalty spot and a threat from attacking set-pieces.

During the first half of the 2021/22 campaign, Leupolz was a regular starter for the Blues. She continued her habit of scoring important goals, netting in the FA Cup semifinal win over Manchester City before starting the final against Arsenal at Wembley, where the Blues were victorious.

On the international stage, the German stepped up to the senior side aged 19 and has since surpassed the 75-cap mark. Leupolz enjoyed success along the way with a 2013 European Championship triumph, 2016 Olympic gold medal and she went to both the 2015 and 2019 FIFA Women’s World Cup’s in Canada and France respectively.

In March 2022, having not featured for the Blues since the previous December, Leupolz announced her pregnancy and happily welcomed a new member to the Chelsea FC family last October.

Newcastle United have announced Kieran Trippier has signed a contract extension, keeping the defender at …