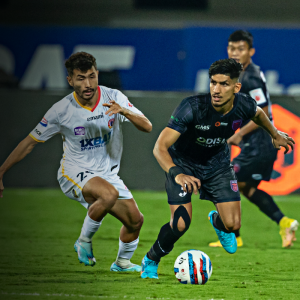 Odisha FC head coach Josep Gombau has praised Narender Gahlot’s performance time and again at the back and considers his ability to play at right-back a bonus for the Juggernauts.

A natural center-back, Odisha FC’s No. 3 has played quite a few games at right-back alongside Carlos Delgado, Osama Malik, and Sahil Panwar. Despite playing in a new position, Gahlot has impressed the boss on numerous occasions.

In his post-match press conference a few weeks ago after the game against ATK Mohun Bagan at the Kalinga, Gombau heaped praise on the young defender.

“We have seen in the last few games that Narender has cemented his position at right-back as he stepped up when Shubham suffered an injury,” Josep said to the media.

“But the coaching staff is well aware that he is a very good center-back as well so it boosts our options at the back and is always good for the team.”

The Indian International has 14 interceptions in 11 games, 610 touches, 261 successful passes, and 14 successful tackles. It is safe to say that the squad is benefitting from Narender’s new playing position.