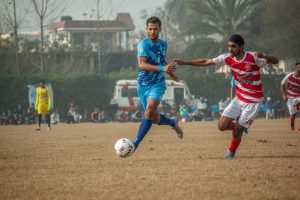 On the back of a 1-0 victory in Amritsar against United FC, Minerva Academy were back in home territory to play their third game in the Punjab Super League Second Division against Principal Harbhajan SA.

Head Coach Yan Law started with his usual suspects, with his 4-3-3 formation and Anwar Ali featuring at the heart of the defense yet again.

The first chance of the game fell to the visitors in the 8th minute. A well-struck free-kick took a nasty deflection, but the in-form Suraj Mallick made a stunning save.

Minerva Academy eased into the game and played some neat, possession-based football, and they were rewarded for it when another in-form Minerva Academy player, Sreyas V.G, got into the thick of things. It was his dispatched shot which was saved and then spilled, only for Victor Ekomobong to score with an easy tap-in and make it 1-0.

Minerva Academy kept the momentum and controlled the tempo of the game. Another chance followed as Nikhil Mali dribbled from the left wing in typical fashion and drove in a low cross for Radhakanta to get on the end of. It should have been 2-0 to the hosts, but the shot was saved and Principal Harbhajan breathed a huge sigh of relief.

Suraj continued his heroics, as another set-piece from the visitors was punched out by the former Lone Star Kashmir man, before making a brilliant save on the shot that followed. Anwar Ali then came close to scoring at the end of the first half with a towering header which sailed just a couple of inches over the crossbar.

Minerva Academy went into halftime with a well-deserved 1-0 lead.

The second half played out much like the first, with Minerva Academy dominating proceedings and controlling possession. However, Principal Harbhajan had a golden opportunity to make it 1-1 in the 75th minute, as the striker was one on one with Suraj, but Jayananda Singh got back and made a last-ditch tackle to save the day.

A few minutes later, Lalranchinna – who was given the captain’s armband for this game – took a free kick and Anwar Ali again came close to scoring with a lovely header which went over the crossbar.

It seemed like Minerva Academy had snapped up their third victory on the trot in the league, but Principal Harbhajan had other plans. In the 88th minute, Sreyas V.G conceded a free-kick which was sent long at the far post, and a first time effort on goal turned into the perfect cross at the near post for a tap-in. It was 1-1.

Minerva Academy’s impregnable defence was finally penetrated, and they dropped their first points in the Punjab Super League Second Division. But they do not have to wait long for an opportunity to bounce back, as they play their next game against JCT on January 19.