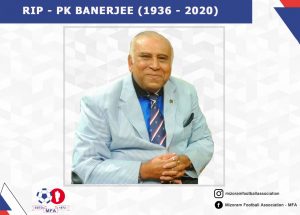 The Mizoram Football Association is saddened to hear the news of legendary Indian footballer P.K. Banerjee who passed away in a hospital in Kolkata yesterday.

Scorer of 65 international goals from 84 appearances for India, the striker was part of Indian football’s golden era, earning a gold medal in the 1962 Asian Games.

He also led India in the 1960 Rome Olympics, where he scored the equalizer against a formidable French team in a 1-1 draw.

Before that, Banerjee represented India in the 1956 Melbourne Olympics and played a key role in their 4-2 win over Australia in the quarterfinals.

Banerjee’s contribution to Indian football was duly recognized by the world governing body FIFA that awarded him the Centennial Order of Merit in 2000.

He is survived by daughters Paula and Purna as well as younger brother Prasun Banerjee.

The MFA deeply mourns the loss of an Indian football legend and sends heartfelt condolences to his family and friends.