Mohammedan Sporting bow out in the Kolkata Futsal League opener! 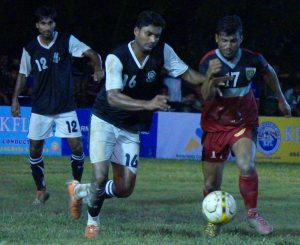 Kolkata giants Mohammedan Sporting Club made a shock exit in the opening match of the inaugural Kolkata Futsal League after losing 5-3 in the quarterfinal round against Southern Samity on Friday, July 8 evening at the Jagriti Sangha Ground in Garia, Kolkata.

For Mohammedan Sporting, Amir Hossain (2) and Khalid Hossain got on the scoresheet, while Abhijit Sarkar (own goal), Basanta Singh (2), Koushik Biswas and Nima Tamang scored for Southern Samity to seal a memorable win for their side.

Southern Samity will now face the winner of the Bhowanipore FC vs Peerless SC encounter in the first semifinal on Wednesday, July 13 for a place in the inaugural KFL final.