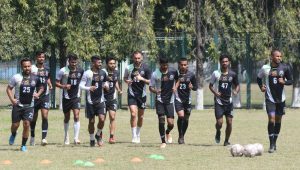 As the race to make it to the Group A heats up, the Phase 1 of I-League all set for a dramatic end. Four teams have confirmed their places in the top six but one point separate three teams vying for the remaining two.

As far as qualification chances are concerned, TRAU and Mohammedan Sporting do not have to depend on other results, if they can get the three points against Real Kashmir and Sudeva Delhi FC respectively.

However, things would get rather interesting, if all three teams finish on the same number of points. With the Head-to-head rule coming into place in such cases, TRAU and Aizawl FC have the upper hand over the Black Panthers.

If TRAU and Mohammedan Sporting were to lose their respective matches, and if Aizawl gets a draw, then it becomes a direct head-to-head between three teams, in which case, TRAU and Aizawl will edge ahead in lieu of a better head-to-head record taking all three teams into consideration.

Should TRAU or Mohammedan Sporting draw their match they will have to wait for the result of the Aizawl’s match to learn their fate.