Mohun Bagan share the spoils with Gokulam Kerala FC in a 2-2 draw! 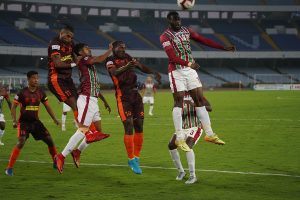 Mohun Bagan and Gokulam Kerala FC shared a point each post a thrilling 2-2 draw in Wednesday’s only game of the 12th I-League. The game that was being played at the Saltlake Stadium in Kolkata, saw the home side failing to secure a much-needed win post their loss in the Kolkata derby on Sunday. While the home side drew first blood through Shilton D’Silva in the 18th minute, their heroics were soon nullified thanks to an own goal in the 21st minute, due to a miscommunication between their defender Kim Kima and goalkeeper Shilton Paul.

Their woes doubled up as Gokulam Kerala FC fired in a second through Marcus Joseph in the 24th minute to take a lead of 2-1. Mohun Bagan finally rescued them from a loss in the 60th minute when Dipanda Dicka scored the equaliser from a Henry Kisseka pass. Gokulam Kerala FC’s goalkeeper Arnab Das Sarma was adjudged the Hero of the Match.

Mohun Bagan started the game in their traditional Maroon and Green while Gokulam Kerala FC in their home strip of Brown and Orange. Khalid Jamil made three changes to the playing XI that had lost the Kolkata derby to Quess East Bengal on Sunday. While Shilton D’Silva, Arijit Bagui and Azharuddin Mallick found their way in, Abhishek Ambekar, Pintu Mahata and Darren Caldeira were left out for today’s clash.

Gokulam Kerala FC also made four changes to the squad today with their latest recruit Fabien Vorbe, Mohamed Irshad, Brijesh T.B. and Suhair VP finding their way back into the playing eleven.

The away side started on an attacking note, with their first attempt to score coming within the first minute from Marcus Joseph’s long ranger, which shot over an out-of-position Mohun Bagan goalkeeper. Mohun Bagan were lucky that the ball curled away from goal, narrowly missing the target.

Gokulam Kerala FC again hit back within a minute when Imran Khan struck again but missed the target. However, within the first 10 minutes of the game, the hosts had four to five opportunities to score but couldn’t, thanks to Gokulam Kerala FC’s careful and alert defenders and some good goalkeeping by their custodian Arnab Das.

Mohun Bagan, after those two early scares, increased the pressure on Gokulam Kerala FC, attacking in short bursts and trying to draw first blood but were unable to break the defensive deadlock. Their efforts finally paid off when Shilton D’Silva headed in a beautiful corner kick from Sony Norde in the 18th minute to give the home side a hard-earned lead in the game. However, the celebrations did not last for long as just three minutes later, some poor communication between their goalkeeper Shilton Paul and defender Kim Kima led to an own goal from the latter, gifting Gokulam Kerala FC the equaliser.

After this, the Malabarians upped the tempo through the flanks – causing trouble for the Bagan defence. They soon earned their lead, capitalising on Mohun Bagan’s defensive lapses in the 24th minute when Marcus Joseph made no mistake beating defender Kingsley to fire into the net over an again out-of-position Shilton Paul – taking the score to 1-2 in favour of the visitors.

Mohun Bagan, who were rattled by their own errors, were found trailing by a goal and started attacking again but were unsuccessful in breaching through the rock-solid Gokulam Kerala FC defence. Their closest chance to an equaliser came in the final seconds of the regulation time of the first half when Kisseka missed a golden opportunity to score from the front of the Gokulam Kerala FC goal. The first half came to an end with the scoreline reading 1-2 in Gokulam Kerala FC’s favour.

The second period began with Mohun Bagan beginning the attacks and looking for an equaliser but as in the first, both their midfield and forward lines seemed a little off-colour and lacked the impetus to create goal scoring opportunities. Gokulam Kerala FC’s defence line, along with their goalkeeper Arnab Das, ensured that none of the attempts from the home team proved threatening enough.

As the second half passed by and post Mehtab Hossain’s entry in the 53rd minute, there were some positive changes in the midfield with Mehtab and El Hussieny combining well. This saw a sudden increase in pace from Mohun Bagan with them attacking continuously through Kisseka and Dicka with able support from Faiaz and Sony Norde on the wings. Their consistent attempts soon paid off when an inch-perfect lofted pass from Kisseka was beautifully directed into the goal by Dipanda Dicka in the 60th minute to finally secure the equaliser for Mohun Bagan.

The game thereafter changed pace as Mohun Bagan sprung back to action looking for that much-needed lead in the game but full marks to Gokulam Kerala FC, as they ensured they didn’t give in to the charged momentum from the home side. Mohun Bagan came close a few times to score for the third time but a lack of direction and some heavy touches eluded them of that decisive goal for a win.