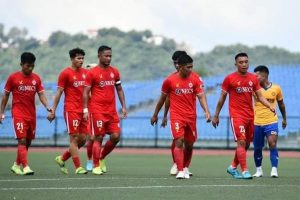 Mizoram Premier League champions Aizawl FC began their quest to defend their crown with a 4-2 victory over Chawnpui FC in an action packed encounter.

The action came thick and fast at Rajiv Gandhi Stadium in a first half that was capped off with five goals. Former Aizawl FC captain and East Bengal midfielder David Lalrinmuana opened the scoring for Chawnpui FC with a brilliantly taken free-kick.

But the lead did not last long with Aizawl FC producing an instant reply through a neat finish from Lalbiakzuala a minute later.

A frantic first half saw Chawnpui FC retake the lead through former Mohammedan Sporting striker M.C. Malsawmzuala but Aizawl FC were able to strike back and take the lead before half-time with strikes from brother Jakob Vanlalhlimpuia and Jeremy Laldinpuia.

The second half was more of a tepid affair compared to the first, but Aizawl FC’s David Lalhlansanga sealed all three points with cool finish on the 70th minute.

The champions will come up against FC Bethlehem next on Tuesday afternoon while Chawnpui FC face Mizoram Police on Monday.