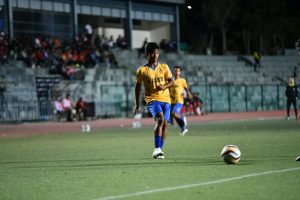 Chawnpui FC were able to hold high-flyers FC Venghnuai in the last match of round 12 as they battled to a 1-1 draw on Friday evening.

A thoroughly entertaining and intense tactical battle saw an even match up between both sides. Venghnuai took the lead through Malsawmzuala Tlangte on the 25th minute.

Their lead lasted only eleven minutes however, as MC Malsawmzuala once again scored a crucial goal for his side when he netted the equaliser on the 36th minute.

Venghnuai are currently second on the table, but 10 points behind leaders Aizawl FC and level on points with Mizoram Police who are third on the table.