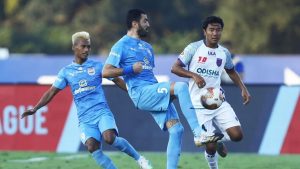 Head Coach Sergio Lobera made three changes to the starting eleven as Mehtab Singh made his full debut for the club, replacing Hernan Santana in the XI. Bart Ogbeche and Cy Goddard too made their way back to the starting XI.

The Islanders were the more dominant side inside the first 12 minutes of the game having kept nearly 75% of the possession. Ahmed Jahouh didn’t take long to impress and created a good chance for Cy Goddard in the 19th minute, only to see the Japanese international flash it over the bar.

Odisha FC’s Shubham Sarangi hand-ball in the 28th minute gave the Islanders the all-important chance to take the lead from the penalty spot. Ogbeche stepped up and calmly converted it with a powerful strike to Kamaljit’s right. It was the striker’s first goal for the club.

In an unfortunate incident, Odisha FC’s custodian Kamaljit took a heavy blow in the 33rd minute of the game in a collision with Mourtada Fall. In the process, Fall’s headed goal was disallowed for a supposed foul but it seemed to be a dubious decision by the referee. Kamaljit, who was visibly concussed, was replaced in goal by former Islander Ravi Kumar.

Keeping the trend up, the Islanders were unstoppable and were never short of scoring opportunities. Bipin Singh’s running in from the left flank has been a common sight for the Islanders and for the Mumbai City FC’s fans. In the 45th minute of the first-half, it was Bipin’s cross that found Rowllin Borges’ darting run deep from the midfield in the right place & at the right time. Borges converted with a header to double our lead just before the stroke of half-time.

Odisha FC had their task cut out in the second-half and Stuart Baxter made an attacking move by bringing in seasoned campaigner Marcelinho on to the pitch for Daniel Lalhimpuia. The visitors kept things tight for the Islanders at the start of the second-half despite a lovely passage of football by Sergio Lobera’s side.

In a tactical move, Baxter made another change replacing Nandhakumar Sekar with Saurabh Meher in the 57th minute of the game. The course of play saw no real goal-scoring opportunity till the 66th minute until a low strike by Diego Mauricio but an alert Amrinder made a sharp save to keep his clean sheet intact.

Odisha FC were struggling to tackle the force in which the Islanders were attacking as they found themselves in the receiving end on multiple occasions but not converting those chances and the lead.

In the closing phases of the game, Marcelinho almost made it 1-2 for Odisha FC but his strike went just wide off the post. Premijit Singh in the first minute of stoppage time had only Amrinder to beat, but he couldn’t make the most of it.