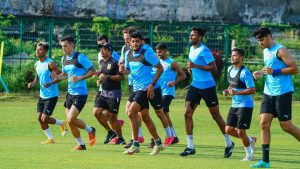 Mumbai City FC are set to take on fellow Indian Super League club Bengaluru FC in the Final of the Durand Cup 2022, after the Islanders defeated Mohammedan Sporting in a nail-biting semifinal game. Mumbai City FC emerged as victors from the semifinals after defeating the Black Panthers 1-0 thanks to a late decisive goal by Bipin Singh. The summit clash of the 131st Durand Cup will be played at the Saltlake Stadium on Sunday, September 18, 2022 in Kolkata at 6pm IST.

The Islanders had a near exemplary group stage, as they won 5-1 and 4-1 against Rajasthan United FC and the Indian Navy respectively. Despite their 1-1 draw with ATK Mohun Bagan in the group stages, and their defeat against East Bengal in a match that ended 3-4 they managed to qualify with top spot in Group B at the 2022 Durand Cup. Des Buckingham’s side won their quarterfinal tie against Chennaiyin FC 5-3 in a gripping game that went into extra-time. Their semifinal game against Mohammedan Sporting saw them earn a hard-fought victory in a game that ended 1-0 in favour of the Islanders. The prolific form of Chhangte and Stewart has seen them score seven and six goals respectively at the oldest football tournament in Asia, which has in turn made the Islanders the top scorers at the 2022 Durand Cup with 19 goals in six games.

Bengaluru FC, on the other hand, won their first two against Jamshedpur FC and the Indian Air Force team, 2-1 and 4-0 respectively. They drew their last two group games against FC Goa and Mohammedan Sporting, 2-2 and 1-1 respectively. The Blues’ quarterfinal tie against Odisha FC ended in favour of the Bengaluru-based club, 2-1 after extra time thanks to a last-gasp winner from prolific striker Roy Krishna. Simon Grayson’s side’s semifinal game saw them take on defending Indian Super League champions Hyderabad FC, which ended 1-0 in favour of the Blues.

In a press conference ahead of the Final, head coach Des Buckingham said, “The game I’m expecting is an exciting one. We’ve set up a way that we want to play and I speak about it being an exciting brand of football which is an attack-based, possession-based game. The team has shown that with the number of goals scored in this tournament already. But you look at the opposition and they’ve had a good run in the tournament and they’ve got some good players with them too. So I’m expecting a very good and exciting final for everyone involved.”

When asked if the Mumbai City FC captain Mourtada Fall had a message for his players, he said,” Same as always, all the players need to be professional and work as a team, help each other and maintain good communication as it is crucial to winning the game. We have reached the final but it’s not the time to celebrate yet, we have to give our all on the pitch to get the result we want.”

Des Buckingham has confirmed that the squad available at his disposal remains the same as it was in the semifinal against Mohammedan Sporting.