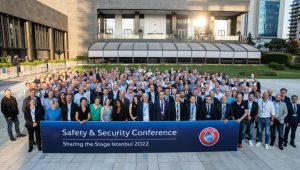 UEFA’s annual Safety and Security Conference brought together security experts ahead of the new season to discuss important issues and share best practices in this crucial sector.

More than 400 people from all over Europe gathered in Istanbul to participate in the latest UEFA Safety and Security Conference.

Representatives from the 55 UEFA member associations, the clubs playing in UEFA’s club competitions and major football policing bodies joined UEFA’s safety and security operations unit in “Sharing the Stage”, the theme for this year’s event.

Preparing for the season

This large group usually gathers once every year, just before the start of the football season, in order to share good practices, network among club security officers and police during an information exchange session, and prepare for what lies ahead.

In a pre-recorded address, UEFA President Aleksander Čeferin kicked off the event. “We believe a pan-European approach is paramount to face all the challenges ahead,” he said.

Michael van Praag, chairman of the UEFA Stadium & Security Committee, added: “This conference is the lead into the new season for safety and security, and it provides a unique opportunity to focus on advance preparation and discuss a variety of core issues, like lessons learned and crowd behaviour analysis.”

Each of the three main sessions featured a key panel discussion, and one major topic focused on the significant changes which have been noticed by clubs since the return of spectators after pandemic-related restrictions were lifted.

In the first session, Ulrich Wolter (RB Leipzig) stated in a video that COVID had helped digitalisation move forward. For example, since the pandemic, people have been faster to accept using only the app for ticketing. In just a year, spectators have stopped using cash only within the stadium.

The panel also looked at the inaugural UEFA Europa Conference League final and the specific training sessions conducted with the Football Association of Albania (F to prepare it for hosting the country’s first major European club final. “The stewards are complaining about the police, the police are complaining about stewards,” said Armando Mandro, the Albanian security officer. “If we offer them joint training, they will know each other”.

At the start of the second session, UEFA’s chief of medical Dr Zoran Bahtijarević came onstage to deliver important messages for the future about COVID-19, highlight the importance of education surrounding this topic, and show retrospectively the immense effort that UEFA had made during the pandemic to keep the game alive. In his takeaway message, Dr Bahtijarević stressed that “vaccination is still our strongest legacy and weapon against pandemics, but social measures and responsible behaviour remain the necessity – one does not work without the other.”

Later on, Keith Still, a renowned professor and scholar, discussed crowd safety, crowd dynamics and crowd science. In his academic work, one of Prof. Still’s main lines of questioning is how and why accidents happen. “The general link of causality is lack of understanding of crowd behaviour and inappropriate safety measures,” he said. “As our society evolves and changes, we need to have tools that evolve with it.” When asked by conference moderator Samantha Johnson how to implement this within football, Prof. Still responded: “very simple – with education and training.”

The third and final panel discussion included UEFA fan relations specialist Siobhán O’Brien and Lena Gustafson-Wiberg, a representative of supporters group SD Europe. Both voiced the expectations and concerns of football fans across Europe. “Safety, security and service is an absolute priority for supporters,” O’Brien insisted. “They’re putting all of their trust and faith in the people delivering, that they’re going to keep them safe.”

In an earlier panel discussion, UEFA also invited Football Supporters Europe director Ronan Evain onstage, to discuss their collaboration with UEFA in order to raise the bar on the level of service provided to fans. “I am very pleased to see that we share not only a very similar understanding of the challenges, but also the same vision of safety, security and service,” Evain reflected.

As part of the conference, UEFA also presented behind-the-scenes footage of the organisation’s match command centre in Nyon, Switzerland.

“The match command centre is primarily a support tool,” explained UEFA’s chief of football operations Keith Dalton. “We have many people on-site from the different domains: security, match delegates, venue directors and commercial colleagues, all of whom need the support of the vastly experienced people working inside the match command centre.”

As the last panel discussion came to a close, Adrian Dinca, from the European Group of Safety and Security Experts, delivered an important message about cooperation “We have finished a season which was very difficult, a lot of challenges emerged – we’ve seen that violence came back to the stadiums,” he explained. “There is a need more than ever for us to work together.”

Dinca stressed that all cooperation must be strengthened, and that this could perhaps be done by deploying an NFIP liaison officer in the match command centre, who could provide UEFA colleagues with the perspective of the local police officers, and vice-versa.