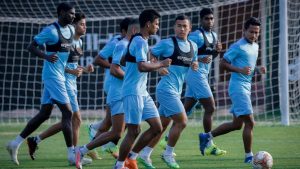 It’s make or break for Mumbai City FC as Sergio Lobera’s men prepare for an important week of football ahead of them. The penultimate league fixture is upon the Islanders as they square up against Odisha FC on Wednesday, February 24. Our final ‘away’ league fixture kicks off at the GMC Bambolim at 7.30pm.

The Islanders tasted back-to-back defeats for the first time in the ISL-7 campaign four days ago after going down 0-2 to Jamshedpur FC in what Sergio Lobera termed as Mumbai City’s ‘worst performance of the season’. Second-half goals from substitutes Boris Singh and David Grande condemned the Islanders to a fourth loss of the campaign on a night when Sergio Lobera’s side never seemed to get into their rhythm.

Odisha FC have had a season to forget by their standards. The Bhubhaneshwar-based side has seen a change in management twice in the campaign, first, after head coach Stuart Baxter was let go by the club and more recently after interim coach Gerald Peyton had to leave the camp due to personal reasons. Coming off the back of a 1-3 defeat against FC Goa, Odisha FC will go into their final two games of the season under former Indian international and assistant coach Steven Dias, starting with the Islanders.

Sergio Lobera is confident that his side is motivated as the Islanders chase the top spot in the league and a win against Odisha will take them one step closer.

Hugo Boumous will continue to serve his extended suspension and will miss out on the action against Odisha FC.

Mumbai City FC head coach Sergio Lobera said, “For now, the second game doesn’t exist for me. My focus is only on Odisha FC and it’s the most important game for us now. It would be a mistake to think about anything else.”

Defender Mandar Rao Dessai added, “You have seen how we’ve played in the past. That is what the coach has reminded us of and wants from us. Not only me, but all of us players also are disappointed in the recent results and we’re focused on correcting it.”