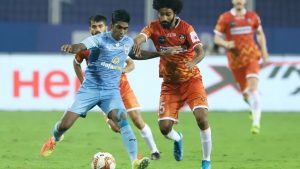 Mumbai City FC and FC Goa played out a 2-2 draw in the first leg of the Indian Super League semifinal 1 at the Fatorda Stadium. The Islanders came from behind twice at the back of two goals scored by Hugo Boumous in the 38th minute and Mourtada Fall in the 61st minute.

Hernan Santana was replaced by Mehtab Singh, Vignesh Dakshinamurthy came in for the suspended Amey Ranawade and Pranjal Bhumij gave way to the returning Hugo Boumous in the starting lineup for Mumbai. Gonzalez and Noguera, who were facing suspension, were replaced by Seriton Fernandes and Princeton Rebello. Glan Martins too returned in the Gaurs first-eleven.

It was an attacking start by the home side with multiple attempts inside the Islanders’ penalty box as they went on to dominate the initial phase of the play. The visitors had one opportunity in the 12th minute with Le Fondre’s cross, but it was just wide of Bipin, the targeted man at the far post.

The Islanders were lucky as a penalty shout just outside the box in the 16th minute was denied correctly by the referee. But, the Gaurs kept the aggression going. In the 20th minute, Mandar’s late tackle on Ortiz inside the box saw the referee award a penalty to FC Goa. Igor Angulo from the spot-kick sent Amrinder the wrong way and found the back of the net with a clean strike to put FC Goa 1-0 in the game.

Mumbai City were to respond quickly and they did just that in the 26th minute. Hugo Boumous fed Bartholomew Ogbeche with a through ball, a brilliant run by Bart only had Dheeraj to beat from an angle. The Nigerian did manage to find the target but failed to get it past Dheeraj, the FC Goa custodian.

FC Goa in a counter once again looked dangerous in the 28th min but the Islanders escaped the danger with some strong work in defense. It was a near-perfect start for FC Goa before Seriton Fernandes had to be stretchered off the pitch injured in the 33rd minute. Leander Da Cunha was his replacement, marking his ISL debut.

Bipin tried his luck from distance in the 36th minute, but couldn’t find the target. More commitment was there by the men in blue and were well rewarded in the 38th minute by Hugo Boumous’ goal. Jahouh showed a great presence of mind with a quick start of a play after a foul. He fed the ball straight to the Spaniard, who with a bit of luck sent the ball to the right of Dheeraj to put Mumbai back on level terms.

Le Fondre and Mandar were shown yellow cards in the closing stage of the first half. Le Fondre’s yellow card was clearly a debatable one. It was a cracker of a first-half and a brilliant save by Dheeraj Singh in stoppage time summed it up for the Gaurs, as they mostly dominated the ball in the attacking third.

Mumbai missed out on scoring in two good-looking opportunities inside the first ten minutes of the second half. A brilliant run & exchange between Boumous and Le Fondre in the 49th min saw Ogbeche make a good move to find the ball at a close range but he missed to find the target. A good cross from Mandar in the 55th minute once again found Ogbeche inside the box, but the Nigerian’s header went just wide of the target.

It was a bit of a stop-start for both sides in the second half before Saviour Gama gave FC Goa their lead back, a bit of lack of commitment by Mumbai City defence gave Gama enough room to run with the ball as he struck it cleanly at the far post.

Mumbai City FC responded strongly two minutes later and once again it was their highest goalscoring defender of the league, Mourtada Fall. Jahouh with a brilliant cross fed the ball straight to the Senegalese who was unmarked and got the back of the net as Dheeraj could just watch it going past him.

Ogbeche had another go at the target. This time with his right foot, but his strike once again failed to find the target as another opportunity disappeared out of thin air.

FC Goa made the second change of the match as Devendra Murgaonkar was substituted for Alexander Romario Jesuraj in the 77th minute.

Both sides failed to create more important chances in the remaining 90 minutes period. But it was far from over as there was late drama in the added time. Fall was shown a yellow card for a crucial challenge on Princeton. He was lucky that it wasn’t more than that. A bit of frustration got the better of Edu Bedia, who got booked for dissent in the 5th minute of injury time.

Adil tried his luck in the last minute of extra time and just missed everyone. Much to everyone’s frustration, the referee gave that corner which was dealt well by Mumbai City FC.

Sergio Lobera will look at correcting a lot of things as they will return for the second leg of this semifinal on Monday, March 8 at the GMC Stadium in Bambolim.