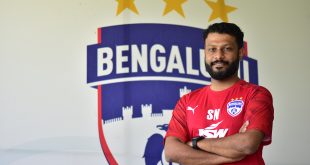 Hyderabad FC put in a solid performance on Saturday to pick up a well-deserved point against ISL leaders Mumbai City FC in Bambolim. Though there were no goals on the night, Hyderabad FC came close on a few occasions and could have easily registered their third successive league victory, on the night.

Manolo’s side kept their first clean sheet since Round 2 of the Indian Super League and stay strong in the fourth place, with 16 points after 11 games.

The hosts were under pressure right from the start of the game as the Hyderabad FC head coach set his side up to press high and force mistakes at the back. The likes of Aridane Santana, Mohammad Yasir and Joel Chianese were quick to steal the ball in dangerous areas and should have scored on a couple of occasions.

Liston Colaco was at his usual best, as he won three free-kicks within 15 minutes of the game as Hyderabad FC managed to break up Mumbai City’s passing play constantly.

Joel Chianese, who was through on goal after a ball from Yasir, found an inspired Amrinder Singh with his shot. This was after the keeper’s save from a Liston shot from close range. The No 12 was fed in by Chianese from the right but he took a shot from a narrow-angle, even as Yasir and Aridane were waiting for a cut-back.

Both teams went into the break level but Hyderabad FC were the better side in the half. They did need a couple of last-ditch tackles from Asish Rai and Odei Onaindia in this time but were relatively secure at the back, hardly giving Adam le Fondre a sniff of Laxmikant Kattimani’s goal.

Sergio Lobera’s side came out strong in the second half but the energy shown by the Hyderabad FC midfield and front three made it tough for the hosts to play their natural game.

A mistake from Chinglensana at the back, 10 minutes from time, gave Mumbai City the best chance of the game but Odei was there to mop up the danger and made sure that Kattimani got his first clean sheet of the season, in his 50th appearance in the ISL.

A couple of half-chances fell the way of Liston and Aridane, late in the second half as well but none Hyderabad FC could take advantage of. Manolo Marquez introduced the likes of Roland Alberg, who came on for his Hyderabad FC debut and Halicharan Narzary but the lack of a decisive moment meant that Hyderabad FC had to settle for a point.

Hitesh Sharma, who was named the ‘Hero of the Match’, Akash Mishra from left-back and Odei were all up to the task and frustrated the hosts, to put in a disciplined display on the night. If it were not for a spirited Amrinder in Mumbai City’s goal, Hyderabad FC could have easily taken all three points from this game.

Hyderabad FC are back in action when they face Odisha FC at the Jawaharlal Nehru Stadium in Fatorda on Tuesday, January 19.