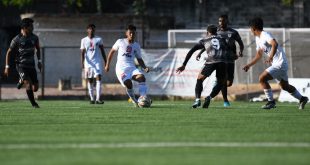 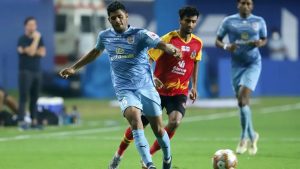 In the starting eleven for the Islanders, Hugo Boumous replaced Raynier Fernandes, Mehtab Singh came in for the suspended Hernan Santana and Vignesh D started in place of Mandar Rao Dessai. The home side SC East Bengal made two changes, Bright Enobakhare and the suspended Ajay Chhetri were replaced by Matti Steinmann and Harmanpreet Singh.

The visitors started aggressively but it was Le Fondre who had the first sight of goal only in the third minute of the play after receiving a good pass from Cy Goddard. But the no. 9’s effort was just wide of the target.

Daniel Fox was booked for catching Bipin Singh in the fifth minute of the first half. The Islanders kept the attacking mode on and came close to scoring the first goal on a few occasions. Rowlin’s long-range effort in the 12th minute went straight into Debjit’s safe pair of hands. This was followed by a series of good passes in the 14th minute that finally saw Cy sending a brilliant cross inside the box. Debjit, on this occasion spilled it right in front of Boumous who surprisingly misfired it well off the target.

In the 17th minute, Maghoma tried his luck for the home side. But his attempt was wide of the target. Cy, followed it up at the other end with a similar outcome.

There were no real opportunities from either side as some solid defending kept the game in balance. In the 23rd minute, Jahouh was shown a yellow card for a challenge on Scott Neville.

SC East Bengal’s resistance was finally broken in the 28th minute. It was Fall’s header that put the Islanders on board after Boumous spotted him unmarked inside the box with the Senegalese timing his header perfectly to find the back of the net.

The home side had a sniff at the Islanders’ goal in the 35th minute from a free-kick that found Matti Steinmann’s header but it went straight to Amrinder who made no mistake in catching it cleanly. There was more incoming aggression on its way from the home side in the 40th minute of the first-half but a couple of solid blocks from Fall saved the day for the Islanders.

Mumbai City FC should have doubled the lead at the stroke of half-time if not for a mistimed header from an unmarked Le Fondre after he was found by an exquisite cross from Bipin Singh.

East Bengal started the second half with a double substitution. Rana Gharami and Mohammed Rafique came in for Surchandra Singh and Ankit Mukherjee.

The home side kept more possession at the start of the second half. They looked in more control. In the 49th minute after a series of attempts to test Amrinder, Milan Singh looked for glory but couldn’t find the target. In an unfortunate course of the event he also caught Fall’s arm on his face and needed some medical attention.

Mourtada Fall, who was already having a good day at the office, had a chance to double his team’s tally in the 57th minute. A ricochet delivery from Boumous found the Sengalese whose header was blocked well by the home side’s defenders.

Pilkington responded well in the 60th minute. The Irishman’s effort though lacked power and direction as his strike went straight into the safe hands of Amrinder.

In the first change for Mumbai City FC, Mandar Rao Dessai replaced Vignesh Dakshinamurthy. SC East Bengal followed with a change of their own. Bright Enobakhare who wasn’t in the starting eleven came in for Matti Steinmann.

The home side came very close to an equaliser with Pilkington’s corner that went straight to Fox whose header missed everything and went just inches away from the post. SC East Bengal dictated the game in the final 15 mins as well as they dominated the possession and created more chances. The Islanders were defending well and showing why they have such a strong defence and have conceded just the four goals so far this season.

The Islanders on the other hand kept things tight. In the process, Hugo Boumous & Mandar Rao Dessai went to the referee’s book in the space of two minutes.

In a series of last few changes from both sides, Aaron-Amadi Holloway replaced Daniel Fox to add more attacking options for SC East Bengal. Mumbai City FC responded well and got some fresh legs via Vikram Pratap Singh and Raynier Fernandes on the pitch for Bipin Singh and Hugo Boumous.

Scott Nevile for East Bengal had a shot on target but Amrinder pulled off another good save to keep the clean sheet intact for the Islanders. Bartholomew Ogbeche got the final booking of the match in the 86th minute.

SC East Bengal gave it all in the final few minutes and again in the added time. First, there was no one to receive Bright Enobakhare’s cross on the far side of the goal. This was followed by another well-aimed cross from Aaron-Amadi Holloway that found Harmanpreet in front of the goal, who just hit that wide of the target.

Robbie Fowler’s SC East Bengal has shown great promise after a poor start of the campaign. Their seven-match unbeaten run came to an end against the table-toppers Mumbai City FC, who equalled Bengaluru FC’s ISL unbeaten record of 11-matches.

The Islanders take home the three points but have a short period to celebrate as they go up against Chennaiyin FC on Monday, January 25.