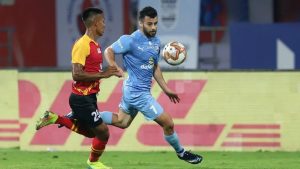 Adam Le Fondre’s brace and a wonder strike by Hernan Santana helped Mumbai City FC beat SC East Bengal 3-0 in the Indian Super League. The Islanders are now at the top of the points table for the time being, having played three matches with two wins and a loss.

For Sergio Lobera’s Mumbai City FC, Ahmed Jahouh made his return to the starting eleven. Bipin Singh along with Vignesh Dakshinamurthy and Mohamad Rakip were named in the line-up by Sergio Lobera.

Jahouh created a chance with a long ball in the 9th minute. Boumous did everything right to try and give the Islanders a lead, but a fine close-range save from Debjit Majumder kept Hugo’s strike away.

In the 10th minute Mohamad Rakip was shown a yellow card for a tackle on Narayan Das and became the first player to go into the referee’s book.

The next passage of play saw East Bengal with more positive intent. Jacques Maghoma tried his luck from the distance but it was an easy save for custodian Amrinder Singh. Rafique, in the 19th minute, made a fantastic run and went for glory, but an equally brilliant Amrinder went flying keeping Rafique’s shot out of the top corner and the scoreline, goalless.

The resulting SC East Bengal corner presented a counter-attack after Borges made an exceptional diagonal pass straight to Boumous, who made a great run with the ball and unselfishly fed it to le Fondre to do the job. Le Fondre, who was playing his 600th professional match, made the most of it to score his 229th career goal and his second of the 2020-21 ISL campaign.

A similar-looking opportunity came in the 25th minute of the game with great coordination and pace from our midfield but was cleared by SC East Bengal’s defence.

In response to Mumbai City FC’s dominance, East Bengal’s Surchandra too found the opportunity in the 29th minute. He went for a cross, only to find Amrinder for a simple catch.

Rowllin was the second Islander to get booked for tackling Balwant from behind in the 36th minute. It gave East Bengal a set piece from a promising position. Narayan Das didn’t make the most of it as he hit it over the bar to give Mumbai City FC a goal kick.

A risky move from Jahouh in the 39th minute of the first-half saw an opening for East Bengal, but forward Anthony Pilkington couldn’t make the most of the opportunity from the edge of the box as his strike didn’t bother Amrinder who made another easy save.

In the 42nd minute, Balwant made a good move from a pass by Pilkington only to be called offside by the linesman. Mourtada Fall was shown a yellow card in the 44th minute for a sliding challenge on Maghoma.

It was an action-packed first-half mostly dominated by the Islanders. The score of 1-0 could have been different if not for some brilliant piece of goalkeeping at both ends.

The Islanders had a dream start to the second half. In the 47th minute, Jahouh’s another brilliance found Boumous in the box. The Frenchman was fouled by goalkeeper Debjit Majumder, another former Islander, rewarding the Islanders with a penalty. Le Fondre could do no wrong as he hammered it past the SC East Bengal keeper to make it 2-0.

Jahouh got his name added to the referee’s book in the 53rd minute for a foul against Steinmann and thus becoming the fourth player to get a yellow card for the Islanders. The 57th minute saw the first booking from East Bengal after Wahengbam Angousana’s sliding challenge on Le Fondre.

A minute later, Jahouh, known for his great distribution, produced another impressive moment. A top quality pass to Boumous, who did well to give it back to Hernán Santana. The Spaniard found the connection and let a shot fly into the top corner of the SC East Bengal net to put the Islanders 3-0 up and in a comfortable position.

Pranjal Bhumij came in for Vignesh Dakshinamurthy in the 60th minute as Mumbai City’s first change of the match. The referee, who was in his trigger-happy zone all night, flashed a yellow card to Mandar who became the fifth Mumbai City player to receive a yellow card.

Balwant made way to Jeje Lalpekhlua for East Bengal’s second change of the match in the 67th minute. For Sergio Lobera’s side, Le Fondre made way for Bartholomew Ogbeche in the second change for the Islanders.

In the 75th minute, Bipin made a great run to meet Boumous’ pass, but the winger couldn’t make the most of it as his left-footed shot got blocked by Narayan close to the penalty area.

In a desperate attempt to find a consolation goal, SC East Bengal made a double change by bringing in Abhishek Ambekar and Sehnaj Singh for Surchandra Singh and Wahengbam Angousana in the 78th minute. Mumbai City FC followed it up with a triple change as Sergio brought in Cy Goddard, Mehtab Singh and Farukh Choudhary for Hugo Boumous, Bipin Singh and Rowllin Borges.

Mumbai City never dropped a gear and continued to put pressure in the opposition’s half. In another brilliant course of play, Ogbeche made a great run in the closing stage of the game and went from a distance, but ended up going wide of the target.

Pranjal almost had a sniff of the goal in the 4th minute of injury time after a poor clearance by East Bengal’s Irshad and that probably summed-up a bad outing for Robbie Fowler’s side.

For Mumbai City FC, it was a perfect result to mark the first ‘home’ game of the season – a 3-0 win, three well-deserved points from the game and signs of Sergio Lobera’s philosophy coming together.