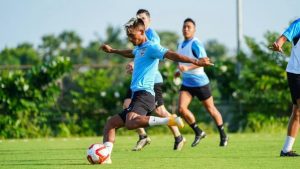 Already through to the knockout stage, Mumbai City FC will look to maintain their unbeaten run when they face home side East Bengal in their final Group B tie of the Durand Cup 2022 on Saturday, September 3 at the Kishore Bharati Stadium in Kolkata with the action kicking off at 6pm IST.

After a comprehensive 4-1 win in their first game against the Indian Navy Team at the Durand Cup, the Islanders played out a close run 1-1 draw against ATK Mohun Bagan in their second match. They then eased past Rajasthan United with a 5-1 win in their previous game to confirm their place in the quarterfinal of the tournament.

Their opponents East Bengal currently sits at the bottom of Group B. They are yet to secure their first win at the tournament having played out two goalless draws against the Indian Navy team and Rajasthan United FC respectively. They lost to arch-rivals ATK Mohun Bagan due to a solitary goal in their previous game.

Mumbai City FC head coach Des Buckingham said, “I am very happy with the team’s performance so far. We have been improving in the way we want to play. We had five different goal scorers in the previous game, so it shows the players are getting into good momentum. We have already secured qualification to the next round of the tournament, but there is still a game left that too against the home side East Bengal. They are a quality side and it will certainly be a good challenge for us, especially with the crowd cheering for them. We are looking forward to the game against East Bengal, and our focus will be to keep the momentum going and stick to the plans.”

The game will kick off at 6pm IST and will be broadcasted on Sports18 1 & Sports18 1 HD and can be streamed online on Voot and JioTV.