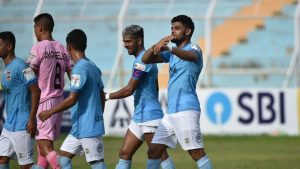 Mumbai City FC came out comfortable 5-1 winners against Rajasthan United FC in their third Group B at the 131st Durand Cup on Monday. The Islanders still sit at the top of their group and have secured qualification to the next round of the tournament with one game to go in the group stages.

Jorge Pereyra Diaz was a menace for the Rajasthan United FC defence as he was constantly dropping into midfield to allow the likes of Bipin, Stewart and Chhangte to roam free and exploit space behind him, as Des Buckingham’s tactics were proving to be very effective.

In the 18th minute, Chhangte doubled Mumbai City FC’s lead as his powerful left-footed shot from the right wing was deflected into Rajasthan United’s goal by their defender and their goalkeeper was left wrong-footed.

Despite the constant pressure by the Mumbai City FC, Rajasthan United FC showed steely determination to make their presence felt in the game but struggled to do so.

The Islanders’ dominance led to their third goal as Greg Stewart’s immaculate corner was slammed into the Rajasthan United FC goal by an unmarked Mehtab Singh, to make it 3-0 in favour of the Islanders in the 36th minute of the game.

The Islanders went into the second half with a comfortable 3-0 lead in their hand as Rajasthan United FC looked to compose themselves before the second half started to restrict the prolific Mumbai City FC attack.

Mumbai City started the second half in the same vein and their relentless pressure led to a penalty as substitute Vikram Partap Singh was brought down by Rajasthan United FC’s defender in the box. The penalty was converted with ease by midfield maestro Ahmed Jahouh in the 63rd minute to stretch the Islander’s margin of victory to 4-0.

Finally, Rajasthan United FC’s steely determination paid off in the 67th minute of the game as they pulled back a goal through Nikum Gyamar, who cut in from the right wing to beat Phurba Lachenpa with a powerful left-footed shot. Soon after Lachenpa was substituted in the 76th minute by Mohamad Nawaz as the Islander’s number 1 suffered a head collision due to which he had to be taken off.

Mumbai City FC looked poised to score another goal in the remaining time however and did so through Vikram Partap Singh in the 95th minute of the game. The tiring Rajasthan United FC defence could not stop his run and composed finish to make it 5-1 for the Islanders.

Mumbai City FC become the first team from Group B of the 2022 Durand Cup to qualify for the next stage of the tournament. They will take on East Bengal in their final group game on Saturday, September 3 at the Kishore Bharati Krirangan.