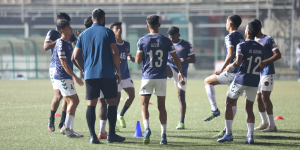 Mumbai Kenkre FC will go up against defending champions Gokulam Kerala FC in the fifth-round clash of the I-League 2022-23 on Sunday, December 4 at the Cooperage Stadium in Mumbai.

For both teams, the match is an opportunity to end their respective winless runs and build momentum as we enter the thick of the action in the league. The hosts have registered just one point in their last three games, suffering a 0-1 loss at home to NEROCA FC in their latest match.

Meanwhile, Gokulam Kerala will aim to bounce back after a loss to Sreenidi Deccan FC in their previous fixture and enter a scoring rhythm, having found the net only twice so far in the four games they have played.

The two sides have faced each other only once in the I-League and it was a goal-fest to remember last season as the team from Kerala ran out comfortable 6-2 winners.

Speaking at the pre-match press conference, Mumbai Kenkre FC head coach Akhil Kothari mentioned that his players are working hard to improve their conversion in front of goal.

He said, “We know that in the previous matches, we missed a few opportunities that we should have capitalized on. It is a work in progress. We are working on scoring more and the players are working very hard toward that. There is a lot to learn from our previous match and we want to take those learnings forward to tomorrow’s game. Our approach and intent are to progress in this competition and we will try our best to play good football and be competitive.”

Forward Yash Mhatre said, “It has been almost a decade that I have been a part of Mumbai Kenkre FC. We have been through a lot together and the club has always kept on improving and moving upwards. We are all positive and hope to keep getting better. We are ready for tomorrow’s match.” 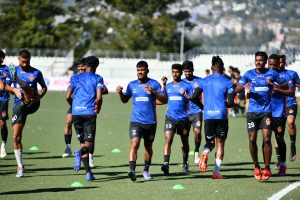 Gokulam Kerala FC head coach Richard Towa talked about his team’s preparation for the encounter. “The I-League has no easy matches. Each team can beat anyone. We have focused on recovery in the last few days and tomorrow, we will be ready to play our game and get the three points. It will not be an easy game as Mumbai Kenkre will have the home advantage. They are a good team that plays positive football, but we will be prepared,” he said.

Midfielder Farshad Noor, who captained the Afghanistan national team in last year’s AFC Asian Cup Qualifiers against India, sounded positive ahead of tomorrow’s clash. He said, “It has been a good journey with the club so far and tomorrow, we expect to win and go back home to Manjeri with a good result and three points. This will be our fourth away match in a row, which can get difficult, but we are positive and looking forward to the game.”

The match between Mumbai Kenkre FC and Gokulam Kerala FC will kick off at 4.30pm IST, and will be broadcast live on Eurosport and Doordarshan Sports, and streamed live on the Discovery Plus OTT platform.