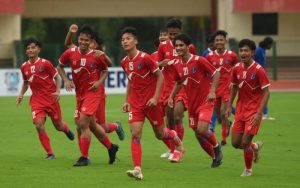 Nepal and Bangladesh registered victories in their opening matches of the SAFF U-20 Championship which kicked-off at the Kalinga Stadium in Bhubaneswar on Monday, July 25.

While Nepal defeated Maldives 4-0 in the opener, Bangladesh scraped past Sri Lanka by a solitary goal in the other match of the day.

India begin their campaign against Bangladesh on July 27. The match will kick-off at 4pm IST, and will be streamed live on the Sportzworkz YouTube Channel and on the Eleven Sports platforms.

It was an emphatic start for Nepal at the Kalinga Stadium 🏟️ in Bhubaneswar, as they stormed 🌩️ past the Maldives in the #SAFFU20 🏆 Championship 🙌

Bangladesh eked out a narrow victory against Sri Lanka in the second match of the day at the Kalinga Stadium in Bhubaneswar in the #SAFFU20 🏆 Championship today.