NEROCA beat TRAU in Imphal derby to move out of I-League relegation zone!

Press Release 2023-01-18 I-League Comments Off on NEROCA beat TRAU in Imphal derby to move out of I-League relegation zone! 536 Views 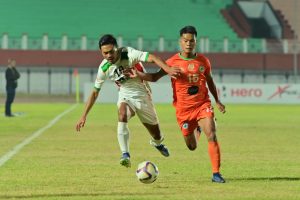 NEROCA FC came out with flying colours in the I-League match here at Khuman Lampak Stadium on Wednesday, January 18. They won the prestigious city derby 3-1, got out of the relegation zone for the time being and avenged the first-leg defeat to archrivals Tiddim Road Athletic Union.

It was an exciting encounter living up to its billing, but did not begin well for the eventual winners. Ten minutes into the game, trying to clear a cross from the right by TRAU’s Salam Johnson Singh, NEROCA captain and defence mainstay David Simbo headed it on to TRAU’s lone striker Komron Tursunov, who calmly chested it down and put it into the net with his right foot.

Till the half-hour mark, TRAU kept attacking and looked like scoring any time but coach Leimapokpam Nandakumar Singh’s tactic of playing Brazilian Fernandinho from behind, and his lack of co-ordination with Tursunov, meant many forray were lost in attacking third because there was nobody at the right place at the right time.

NEROCA came back into the match with the equaliser in the 37th minute. Side back Paogoumang Singson crossed from the left and Jourdain Fletcher scored a world-class goal with a side volley that TRAU goalkeeper Bishorjit Singh had no chance of saving. Bishorjit otherwise had a good match. But for him, NEROCA could have scored one or two more. He gave it all in the 75th minute to save an attempt by Sweden Fernandes and injured himself badly. He had to be replaced by Shayan Roy.

TRAU had the chance to go up once again just before the breather as Tursunov had gone past the defence and Simbo held him back in desperation. Referee Surojit Das had no hesitation in awarding the penalty. But Fernandinho’s low left-footer was saved by Soram Poirei.

TRAU began the second half with equally attacking mood and came close to scoring once or twice. NEROCA got the chance to go 2-1 up in the 64th minute Kamo Bayi, who had an off day, got a lovely through from Hero of the Match Fletcher on the counter. Entire TRAU defence was left behind and Kamo’s right-footer did beat Bishorjit but narrowly missed the far post.

In the end, NEROCA coach Wangkhem Khogen Singh’s decision to replace Kamo with Michael Kporvi in the 87th minute proved to be the difference. His precise pass across the field to Fletcher caught the TRAU defence napping and Fletcher had no problem beating Roy with a left-footer.

TRAU were still trying to salvage a point, but the counter-attack settled the result as Kporvi got the opening this time and made it 3-1.