Bengaluru FC pick up momentum with 3-0 win at Jamshedpur FC! 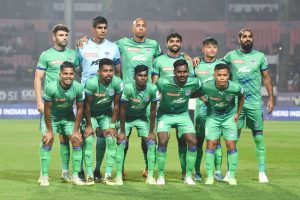 Bengaluru FC’s charge to a play-off spot gathered further momentum after a stunning 3-0 win over Jamshedpur FC at the JRD Tata Sports Complex in Jamshedpur on Wednesday. Rohit Kumar (7′) and Roy Krishna (34′) scored for a second successive game, while Sivasakthi Narayanan (63′) was on target to help the Blues’ gain maximum points against Aidy Boothroyd’s side.

Simon Grayson named an unchanged line-up from the side that beat Odisha FC at the Kanteerava on Saturday and Rohit Kumar vindicated the Englishman’s decision to hand him yet another start by scoring his second goal in as many games to give the Blues an early lead.

Roy Krishna played a perfect pass down the line for Prabir Das whose eventual cross into the box found Rohit in space. Unmarked, the midfielder kept his composure and tapped home a well-timed volley to make it 1-0.

Having conceded the opener, Jamshedpur FC continued to press for an equalizer, but were unable to get past Bengaluru FC’s resolute defence.

The Red Miners saw opportunities from set pieces and won 10 corners and found themselves going close on goal on quite a few occasions as well. But it was Grayson’s men who doubled their advantage, much against the run of play. A simple pass from Javi found Roy in space, and the Fijian responded by smashing home an arrow of a strike from 25-yards out to make it 2-0.

The home side were forced into making a substitution just before half time as Laldinpuia had to make way for Muhammad Uvais due to injury. The Blues went into the half-time break with their tails up thanks to their two goal advantage.

The second half started in a similar fashion to the first, as Aidy Boothroyd’s men enjoyed most of the possession. Just five minutes in, Jamshedpur FC came close to finding their opener when Harry Sawyer saw himself at the end of a gilt-edged cross from Ricky Lallawmawma, but the Australian saw his header bounce over the crossbar.

The Blues were comfortable allowing the hosts into the game and playing on the counter, and it paid dividends once again, as Sivasakthi scored his second goal in three games. Getting the ball on the right, the youngster switched his feet and unleashed a sweet strike past Vishal Yadav from just outside the box to extend the Blues’ advantage on the night.

Despite having the luxury of the lead, Simon Grayson made attacking changes, subbing Udanta Singh for Prabir Das, and later bringing on Sunil Chhetri, Jayesh Rane and Pablo Perez for the final 10 minutes. Jamshedpur FC continued to get more corners and came close on a few occasions, but the Blues’ centre-back duo of Alan Costa and Sandesh Jhingan stood firm to deny the hosts any consolation from the game.

The win was the Blues’ sixth of the season, and their third on the spin. Bengaluru FC will now have a 10-day gap before they face Chennaiyin FC at the Kanteerava Stadium on Saturday, January 28.