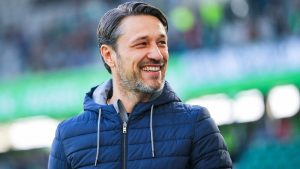 Niko Kovac is returning to the Bundesliga as the new head coach of VfL Wolfsburg. The 50-year-old has signed a three-year contract with the Green-and-Whites until June 30, 2025. “I’m a child of the Bundesliga, and I have great desire and motivation to add another successful chapter with the Wolves,” said Kovac, whose greatest successes as a Bundesliga coach to date are winning the league and cup double with FC Bayern Munich in the 2018/19 season as well as the DFB Cup victory with Eintracht Frankfurt in 2018.

The former Croatia coach will be joined in Wolfsburg by his younger brother Robert, 48, as assistant, with further additions to the coaching staff to be announced in the coming days. The club will also confirm in due course when the official unveiling of the Wolves’ new head coach will take place.

“When filling the coaching position, it was important to me that we not only find someone quickly, but above all that we appoint a coach who can develop VfL Wolfsburg in the long term and take us forward,” said VfL managing director Jörg Schmadtke. “I am therefore very pleased that we were able to convince Niko of our path and get him on board at VfL. He stands for consistent and success-oriented work and I am convinced that the team will bear his hallmark in the coming years.”

Kovac is re-entering the Bundesliga stage after a successful time in France with Ligue 1 club AS Monaco. “The talks with Jörg Schmadtke and Marcel Schäfer were very good and trusting, and convinced me to accept this exciting challenge,” commented Kovac. “I’m very excited about making a difference and being successful in Wolfsburg alongside my coaching staff. The team has enormous potential and the conditions are ideal for success here.”

Berlin-born Kovac began his professional career at Hertha BSC, then in the second division, where he made a total of 148 appearances and scored 15 goals. In 1996, he moved to Bayer 04 Leverkusen in the Bundesliga. Following further spells in the top flight at Hamburger SV, Bayern Munich – where he won the Intercontinental Cup in 2001 as well as the Bundesliga and DFB Cup in 2003 – and back at Hertha, he left Germany after 241 Bundesliga appearances and 31 goals to sign for Red Bull Salzburg in the Austrian Bundesliga. He won two league titles there before ending his playing career in 2009. He also scored 14 goals in 83 games for Croatia, taking part in the 2002 and 2006 FIFA World Cup’s as well as the UEFA European Championships in 2004 and 2008.

Kovac stayed on at Salzburg to begin his coaching career in summer 2009, first as reserves boss and then as first-team assistant in 2011. From January 2013, he was in charge of the Croatian Under-21 side, before being promoted to head coach of the senior national team in October of the same year. With his brother Robert by his side as assistant, he led Croatia to the 2014 World Cup in Brazil. In April 2016, Kovac took over as coach at Bundesliga club Eintracht Frankfurt. After keeping the Eagles in the top flight, he guided them to the final of the DFB Cup in each of the following two years. Having lost to Borussia Dortmund in 2017, Eintracht lifted the trophy in 2018 with victory over Bayern. That summer, Kovac moved to the German record champions, with whom he won the double of the league and cup in the 2018/19 season. In 2020, he was appointed head coach at Ligue 1 club AS Monaco, where he stayed until the end of 2021 having led them to the final of the Coupe de France earlier in the year.