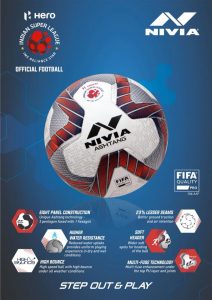 The Football Sports Development Ltd. has signed a multi-year agreement with NIVIA, a leading Indian sports manufacturing brand, to be the official ball partner of the Indian Super League starting the season 2018/19.

With the three-year multi crore deal, NIVIA will supply the official match balls NIVIA ‘Ashtang’ to the League and the ten clubs throughout the season.

NIVIA Ashtang is a FIFA Pro category approved ball which is the highest quality certification that FIFA can grant on the quality of the ball. The ball has to pass stringent quality parameters in achieving proper bounce, water absorption, roundness, with the final trials occurring at FIFA designated laboratory in Switzerland to get this certification, and to be eligible to be used at the highest level of international matches. This certification is testament to the strictest manufacturing standard upheld at NIVIA.

The iconic Indian sports brand has been associated with the League through individual club deals as kit partners with ATK, Jamshedpur FC and Shillong Lajong FC (I-League). NIVIA, since its early days has been closely associated with the grassroots development of football in India and has become an integral part of the glorious history of Santosh Trophy since 1970s.

Rajesh Kharabanda, NIVIA, Managing Director commented, “We are elated to be associated with ISL as the official ball partner. The FIFA Pro categorised Ashtang balls are the newest edition in our professional football product stable and we are confident of upping the game in the highly competitive League environment.”

“The association of NIVIA with the ISL is a constructive partnership aimed towards cultivating a strong system of developing football in India and maturing it to International level, a trend that is evident from the performance of U-20 and U-16 Indian teams recently. I would like to thank Inventive Sports for recognising the synergies and facilitating this association.”

An Indian Super League spokesperson said, “We are delighted to introduce FIFA Pro certified match balls Nivia Ashtang for Hero Indian Super League. Ashtang has been produced by Nivia with the highest standards and newest technology to maximise performance.”

In Sanskrit ‘Asht’ means eight and ‘ang’ means parts – all integrated together to produce maximal results. The ancient Indian practice of Yoga also borrows from this knowledge and offers Ashtang yoga that literally means “eight-limbed yoga”, where each limb signifies the following:

This knowledge is applied to design the Ashtang ball to integrate all the factors of 1.Power, 2. Speed, 3. Accuracy, 4.  Control, 5. Stability, 6. Feel, 7. Cost, and 8.Playability to get maximum efficiency from every shot.

Construction of the Ball

This Made in India ball is unique in many ways. Instead of conventional 32 Panel this football is made using just 8 Panels thus reducing the seam length by 23%.

NIVIA has been the official ball of major national and international events for last five decades.