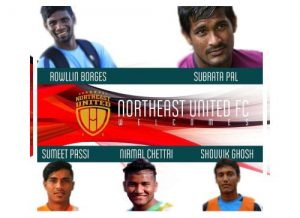 25 year old defender Nirmal Chettri of Sikkim joins NEUFC from Kerala Blasters FC for whom he could not play in ISL-2 due to an injury. The Namchi Sports Hostel product played for Sports Academy of Sikkim, Air India, East Bengal Club, Mohun Bagan AC, Mohammedan Sporting Club, Kerala Blasters and Dempo SC before an injury forced him to miss the complete 2015/16 season.

23 year old Shouvik Ghosh can play as a centre- and left-back. The Uttarpara-born Shouvik had played for Delhi Dynamos FC in ISL-1 but had no club in ISL-2. He was part of the Pailan Arrows before he joined Mohun Bagan AC.

Rowllin Borges is a defensive midfielder, who has played all his professional career with Sporting Clube de Goa and he has never played for a team outside the coastal state. Now the 23 year old leaves Goan shores to move to the Northeast for his first-ever ISL campaign.

Young 21 year old striker Sumeet Passi was born in Chandigarh and started his football career with the local Chandigarh Football Academy before joining the Pailan Arrows. Since 2014 he has been with Sporting Clube de Goa, but only during the 2016 I-League campaign he made his breakthrough and now is set for his first ISL season.

NorthEast United FC with the signing of the Indian quintet is working to rebuild their team ahead of the ISL – Season 3.